Since October 2011, a large number of art institutions in Southern California have been overtaken by Pacific Standard Time, an unprecedented, Getty Foundation-financed orgy of exhibitions and events dedicated to postwar Californian art (1945-1980). Even though at least some of them–most notably Under the Big Black Sun at Geffen Contemporary, a huge survey of punk, protest, feminist and other “alternative” art of the mid- to late 1970s–feature a lot of remarkable artists from Northern California, most institutions in our region did not partake in the project. State of Mind is a pleasant exception: it is the only Pacific Standard Time exhibition on our shores. And hooray, it includes a lot of the same artists as Under the Big Black Sun, only the period covered is a few years earlier. You won’t be wowed by well-executed paintings or sculptures here: the art on view will be mostly ephemeral, and a lot of it will be documentation of Conceptual art events. Those range from anti-Vietnam War protests and feminist performances to clever deconstructions of the common notion of “art.” The common thread running through the practices is the desire to not engage with the art-commodity market. 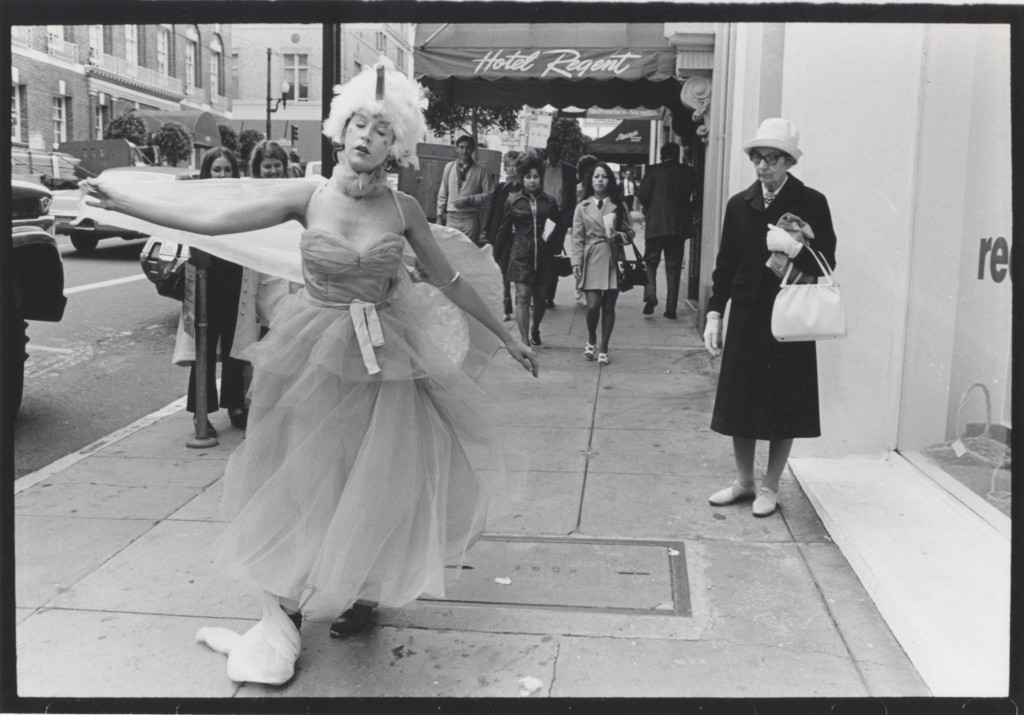 Be afraid, be very afraid. I don’t know what American moms tell their children to be afraid of, but my Russian mom always said I should fear crowds. When I went to my first big outdoor concert as a teenager, my parents advised that I take my ID, so that it would be easier to identify my corpse in case something happened (I grew up in Moscow in the age of frequent terrorist attacks). What was that all about? Oh yes, crowds is the theme of the new YBCA exhibition. There will be contemporary works about political protests (Andrea Bowers), soccer matches (Alexey Kallima and Stephen Dean), rock concerts (Ryan McGinley and Elaine Constantine), national celebrations (Melanie Smith), and other events with large concentrations of humans.

The figure of Genesis P-Orridge is essential to the history of both contemporary art and “alternative” music. In the 1970s, with his band Throbbing Gristle and performance collective COUM Transmissions Genesis (b. 1950) used shock and provocation to urge the audience to look at authority critically. TG’s music was the first to be termed “industrial.” His second band, Psychic TV, started in the early 1980s and brought the dance music genre of acid house to Europe. But Genesis’s most important project was his love story with a woman by the name of Lady Jaye (deceased 2007). Rejecting individualism, the two underwent plastic surgery to look exactly alike. A film about them, The Ballad of Genesis and Lady Jaye by Marie Losier, got released in 2011. It was part of the program at last year’s San Francisco Film Festival, but the tickets sold out quickly and not everyone was able to see the film. Thankfully, Landmark Theatres will screen the movie starting March 9, 2012. And on February 2, all interested have the opportunity to meet Genesis and the director in person. Entrance is free.

Rineke Dijkstra (b. 1959) is perhaps most famous for her photographs and videos featuring teenagers. Her pictures are refreshingly realistic–you can easily imagine her subjects sitting next to you on a bus. The exhibit does not excessively romanticize youth, nor does it poke fun at it (as in, “look at those awkward creatures with zits, we all were like this, ha-ha”). Besides the images of adolescents, the exhibition will also include photographic series that are dedicated to soldiers, bullfighters, and new mothers.

The first work I saw by artist and writer Gómez-Peña (b. 1955) was the documentation of a 1979 performance titled The Loneliness of the Immigrant. For 24 hours he lay on the floor of an elevator, wrapped in fabric, and in the end was thrown out with the trash. In another work he and a female collaborator were displayed in a cage as “Amerindian savages” (accounts say some viewers believed them). These are only two of the artist’s performances that deal with the themes of borders and immigration. Gómez-Peña is a prominent presence on the San Francisco scene, helming the collective La Pocha Nostra which, among other things, organizes performance art workshops. On February 14 he will present his new work Strange Democracy at Mills College, as part of the Contemporary Writers Series. The event is free.