Several weeks ago, my friend–who lives in Brooklyn–called me to report a somewhat disheartening experience. Crossing the street to coo at what she called a “perfect” English bulldog puppy, my friend was quickly rebuked by its paranoid owner, who, picking up her prized specimen in haste, muttered a hurtful accusation under her breath: “dog stalker.” Now, my friend is pretty tough; as a New York urbanite, she is used to salty insults and can certainly fend for herself. This term, however, was a new blow to the ego because, well… it’s true. And I’m one too.

Dog stalking, from what I can concur, is a somewhat universal activity for city-dwellers-cum-dog-nerds: people who grew up with dogs, can’t keep them in their cramped apartments and thus must attempt to fill their dog-less voids through YouTube videos of pugs snoring and frequent jaunts (stakeouts) to dog parks to casually admire a Labradoodle here and there. The fact that it is evidently perceived as a creepy activity by dog owners both saddens and frustrates me.

Never fear, however, dear dog stalkers: there is a place for us in the world.

Based out of Daly City’s Cow Palace, the Golden Gate Kennel Club Annual Dog Show takes place over the course of a weekend every year at the end of January. It is the only “benched” show on the West Coast, which means the event encourages guests to participate (peticipate?) behind the scenes. Over 135 breeds were shown at the dog show this year (which occurred on the 28th and 29th of January this year), with approximately 1,200 dogs entered. Featured exhibitors brought along not only their show dogs, but their litter mates as well. The Cow Palace, in turn, became a sprawling dog heaven divided into an exhaustive number of stalls representing every dog breed in the book. Rows and rows and rows and rows of everything from Bull Mastiffs to Petit-Griffon-Basset-Vendeens thrilled my dog stalker sensitivities. My friend and I spent literally three full hours “schmoozing” (schnauzing?) in the hound group section; our swooning advances at Rhodesian Ridgebacks and Cane Corsos were not dismissed but gleefully humored. Question-asking, as well as fawning, petting and weird baby-voice cooing were most certainly welcomed.

In addition to a “Best in Show by Dog Breed” event (with cash rewards), the Dog Show also featured a fly-ball demonstration, a “Best In Puppy Show” (fhdjkfhdj RIGHT?) and an “All-Breed Fashion Dog Show” MC-ed by comedian Greg Behrendt (which my companion and I missed, much to our dismay… we barely made it through the Working group before the event was over). 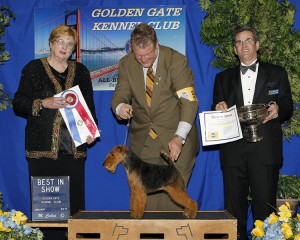 Jackie, a Welsh terrier awarded Best In Show this year. Congratulations, Jackie! And what a coat!
Photo courtesy of the Golden Gate Kennel Club.

Though my friend and I were greeted by PETA-style protesters outside Cow Palace speaking out against puppy mills, we were soon informed that the Golden Gate Kennel Club also invites rescue organizations like the Northern California Italian Greyhound Rescue, the Golden Gate Basset Rescue and other organizations to promote responsible dog adoption and rescue information. Unlike the more uppity dog shows à la Christopher Guest, this event indeed strives to create an inclusive and informative celebration of every canine companion.

So next year, channel Molly Shannon’s Miss Colleen, honor your dog stalker self and get on down to the Golden Gate Kennel Dog Show!