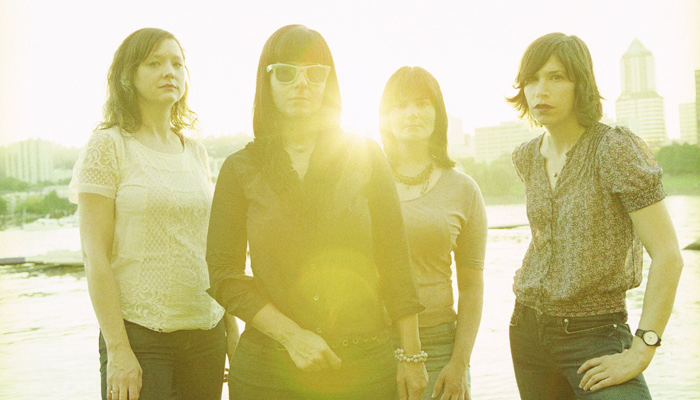 Carrie Brownstein first announced the creation of Wild Flag on NPR’s All Songs Considered Blog in September 2010, a declaration that sent the indie rock crowd into a state of frenzied excitement and expectation. How could it not? Through that blog post, fans found out that Wild Flag had pulled together some of the best rock musicians (all female – awesome) from the past 20 years. Joining the amazing Brownstein (of Sleater-Kinney), Wild Flag also brags the talents of Mary Timony (of Helium), Rebecca Cole (of The Minders) and Janet Weiss (of Sleater-Kinney). A year and a half after that initial announcement, Wild Flag has gone above the music crowd’s high expectations of it, creating an album – the eponymous Wild Flag – that is unpredictable, beating with talent and unapologetically rock-and-roll.

“Romance” is the first track off Wild Flag. Here it is performed live at Mellow Johnny’s Bike shop during KEXP’s SXSW broadcast.

“Electric Band” is the seventh track off Wild Flag. Like the music video itself, the song is catchy, a bit surreal and – dare I say – electric.

Did you not see who makes up this band?! You should care. These are musicians who live to rock. Brownstein said it best in her NPR Blog post. She wrote, “I have no desire to play music unless I need music.” Well, this band needs music. You can feel it. And, truly, should you subject yourself to any band or musician who feels differently?

Another reason why you should not miss Wild Flag at Coachella is because they know how, and love, to perform live. Instead of cutting their album and then going on tour, Wild Flag first went on tour, recognizing that it would be in music venues, in front of music lovers, that their songs would grow and improve. They have an appreciation for music fans and, for this reason, would never give anything but an incredible performance. In fact, they feel so strongly about live music that they recorded their album live (with the exception of the vocals) at The Hangar in Sacramento. Wild Flag knows that the best type of music is immediate and alive, not canned or predictable, and they thrive off this understanding.

If you aren’t one of the lucky souls going to Coachella, fear not. Wild Flag will be in San Francisco between their two Coachella weekends. After that, they’ll head to Portland for one show and then perform at SASQUATCH! Festival in George, Washington. They’ll then be on a break – which, hopefully, will be short-lived.

Get Tickets to Wild Flag