This last Monday I had the pleasure to attend the Languedoc Wine Tasting and Seminar at the beautiful St. Francis Westin Hotel in Union Square. The event proved not only to be a marvelous introduction to the delicious wines of the French Languedoc wine growing region, but an incredibly educational experience to boot.

The Westin’s gorgeous Imperial Floor, with its decadent Tsarist Russian decor, proved to be the perfect venue to showcase the Languedoc brand. Even the famous glass elevator that delivered attendees to the 32nd floor offered the thrill of flying high above the city of San Francisco. Once I arrived on the floor, I could gaze out the many windows over the city skyline and the sparkling ocean–the weather that day couldn’t have been any better. 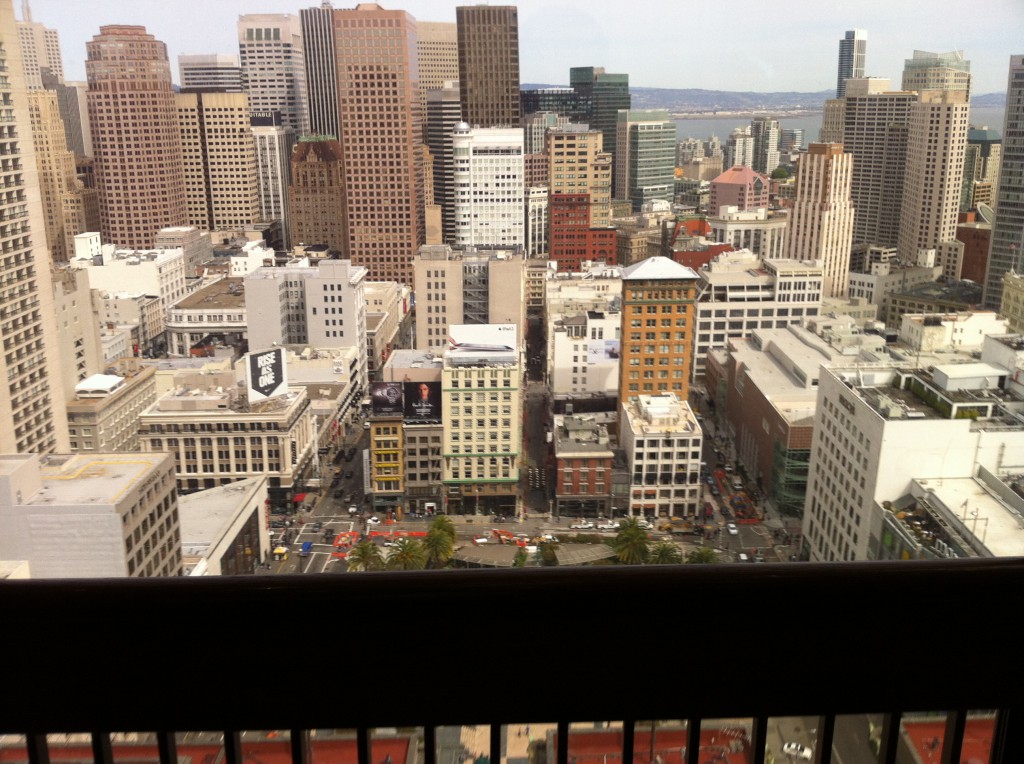 Once inside, I was lucky enough to gain entry to the wine seminar despite not being on the list. Unfortunately, but fortunately for me, a few members of media and trade didn’t show–their loss.

The seminar itself was conducted by a panel of experts on the Languedoc region and its wines. Two panel members, Christine Molinas and Frederic Jeanjean, are executives (Export Director and President, respectively) of the CIVL (Conseil Interprofessionnel des Vins du Languedoc) trade association responsible for increasing international awareness of the Languedoc region and its various AOC (Appellation d’Origine Contrôlée) locales. The other two members were Steven Sherman, owner of William Cross Wine Merchant and Chris Deegan, wine director of San Francisco’s acclaimed Nopa restaurant. The seminar was graciously moderated by Sarah Jones of Benson Marketing, who must be credited for the resounding success of the seminar and the tasting as a whole. 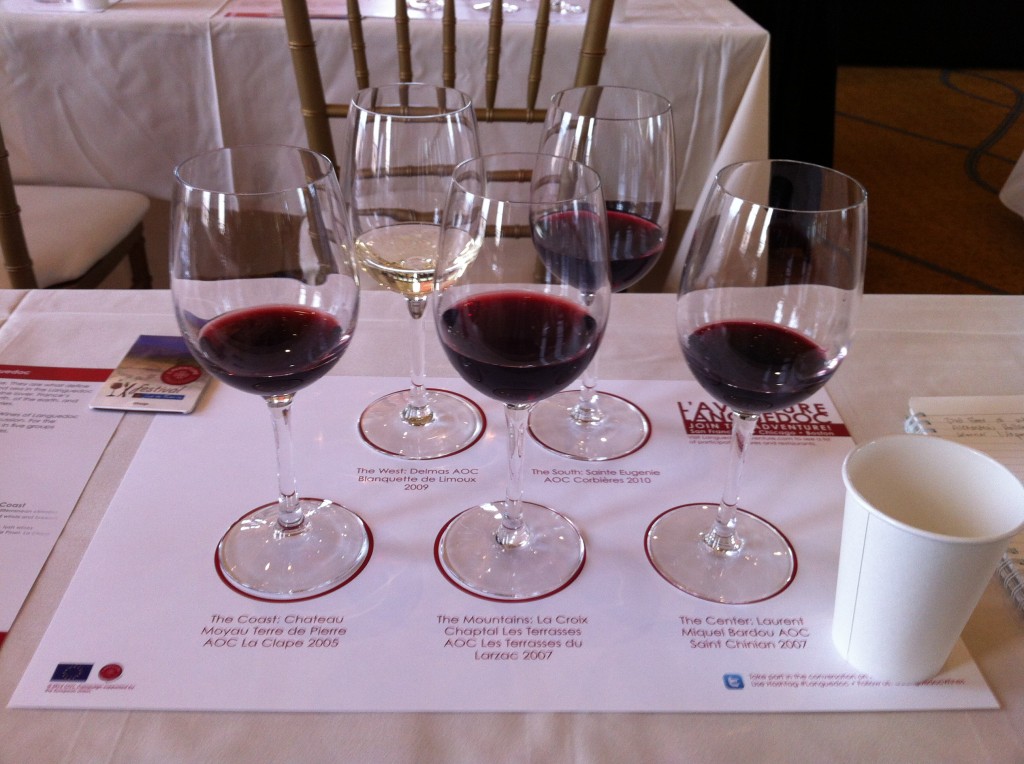 On the table was a beautiful spread of five wines from the Languedoc region, each from very specific locales within the region. Let’s start this review with “The West,” which encompasses the western region of Languedoc. This area is known for its Atlantic and Continental climatic influences, and is where sparkling wines from the Languedoc region are primarily produced. I had the pleasure of tasting Delmas (AOC Blanquette de Limoux) 2009, a delicious sparkling wine that comes with a beautiful floral aroma and a slight flavor of apples. 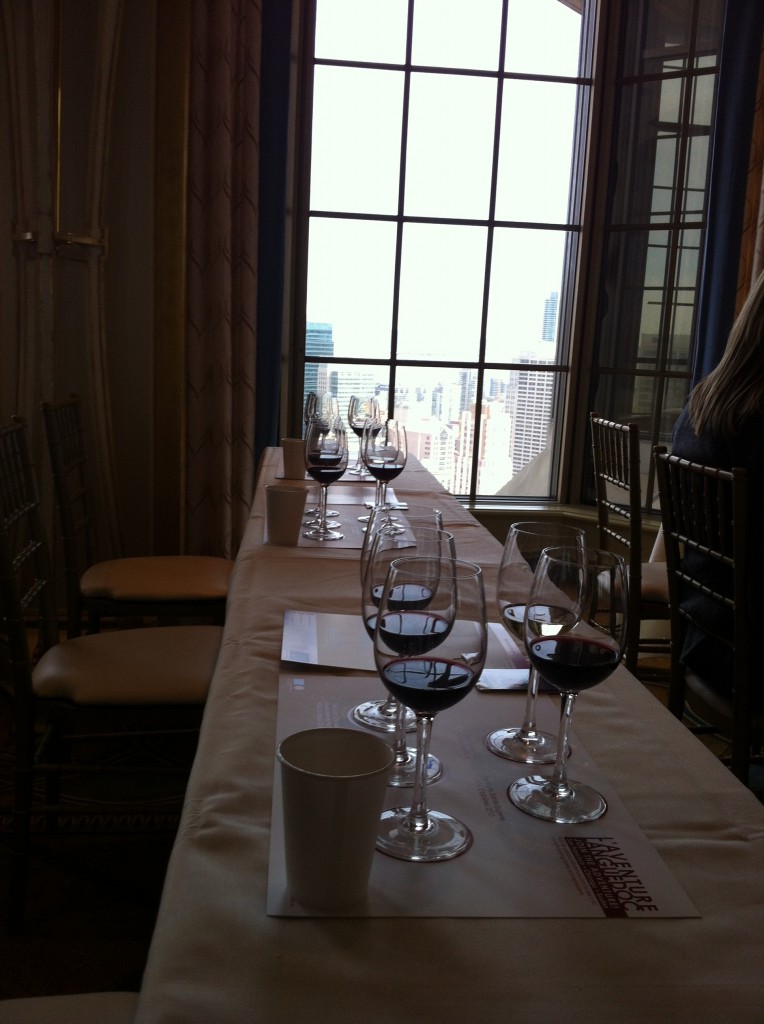 The next wine on the spread was a delectable red from “The South”–a region which is strongly influenced by the Mediterranean Sea and the appellations at the southern end of Languedoc. This particular wine, Sainte Eugenie (AOC Corbières) 2010, was indeed a joy. The wine had a tangy, smokey aroma that seemed to be a signature for reds from the region. The taste had subtle fruitiness to it, with berries being the primary flavor that came to mind.

The third wine was from “The Coast” of the Languedoc region. Here is where the grapes receive strong definition from the Mediterranean climate, as well as from abundant sunshine and sea breezes. The soil also is very conducive to softer, lusher wines than the other regions. The representative wine from this region was Chateau Moyau Terre de Pierre (AOC La Clape) 2005, which, in addition to having the signature tangy aroma, had a remarkably exciting lush texture without being overpowering–unlike any wine I had tasted before. This coastal variety stands as one of my favorite Languedoc wines at the seminar.

Following “The Coast,” we come to “The Mountains,” which encompasses the northern region of Languedoc and is marked by higher precipitation and longer periods of daylight. The wine I was able to sample from this region was La Croix Chaptal Les Terrasses (AOC Les Terrasses du Larzac) 2007, which had a beautifully herbaceous aroma and a taste that was slightly fruity, but not in the least bit overpowering. Ms. Molinas on the panel mentioned that wine from this region takes on the aromas of the province, which include scents of truffles, pine and various minerals–I could definitely sense these aromas in the La Croix.

The last wine on the spread was from “The Center,” or the central region of Languedoc. As you may have guessed, because it is centrally located, grapes from this region are typically influenced by the regions that surround it–lending a very full, complex flavor and aroma to the resulting wines. The selection from this region was Laurent Miquel Bardou (AOC Saint Chinian) 2007 and was actually the first wine I sampled of the five. Because of the wine’s complex aroma that can only be described as tangy and smokey, I found that this would be the perfect accompaniment to a meal outdoors, particularly a barbeque. The flavor was rich and fruity, almost tropical. I must say that this wine from “The Center” of Languedoc was the perfect introduction to tasting wines from the region. 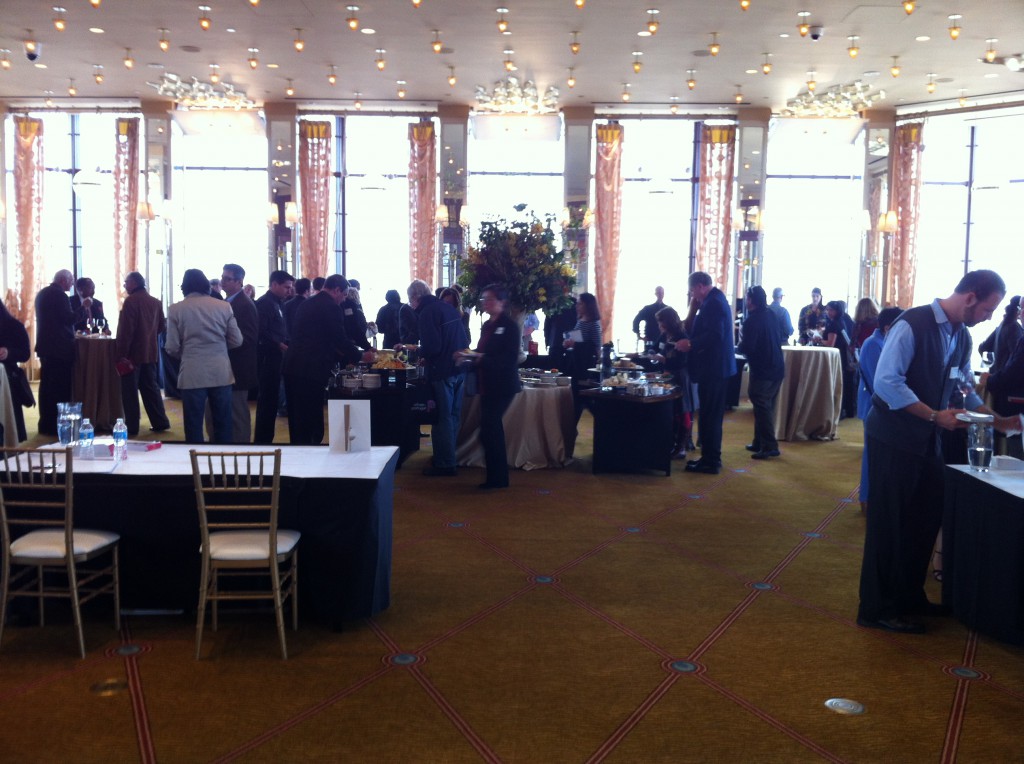 One of the main purposes of this event at the St. Francis Westin was to introduce the abundance of excellent wines from Languedoc AOCs to a group of people who may lack familiarity with the region. Truly, the American market has proven to be quite a successful one for Languedoc wines due to the wines themselves being specially suited to the American palate. Additionally, wines from the Languedoc region are priced perfectly for the average consumer–with top of the line vintages usually running no more than $50 a bottle.

Despite being one of the oldest wine producing regions in the world (the Romans apparently settled in the Languedoc region specifically to grow grapes for wine making), it was only very recently that wines produced in this region began gaining traction internationally as one of the premier wine making locations in France, if not the world. It was indeed a pleasure to be a part of this week’s tasting event and seminar, and it is our sincere hope here at eventseekr that Languedoc winegrowers continue to experience tremendous success here in the United States as well as internationally.