Watching Fulll Firearms, a 2011 feature film by London-based artist Emily Wardill, I thought of a quote by French philosopher Jacques Derrida: “As marginal people excluded from the process of production and circulation, the poor come to represent the gods or the dead. They occupy the place of the dead man or the spirit, the return of the ghost, that is, of an always imminent threat.” The film tells the story of a middle-aged rich heiress named Imelda (Catherine Schaub-Abkarian), who thinks she is haunted by ghosts of people killed by the firearms manufactured by her father’s company. She hires an architect named Laslo (Ariyon Bakare) to build a house for them, and when some squatters move into the unfinished labyrinthine structure, she takes them for the spirits. 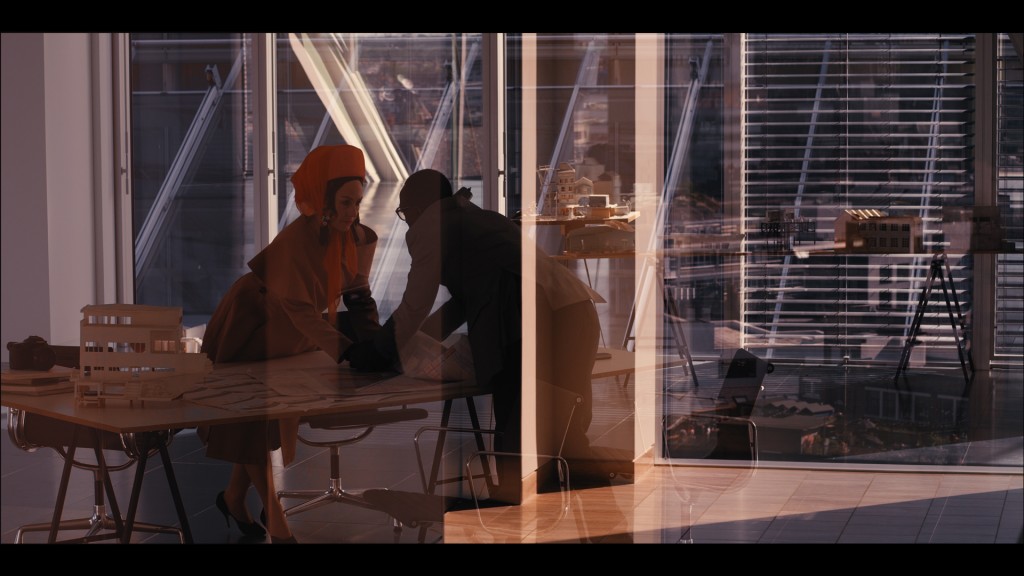 Imelda, seemingly always about to break down, has something of a Lynchean tragic heroine in her. Her style–wild makeup, flamboyant clothes, heavy jewelry, Orientalist headdresses–make her look like a relic from colonial times, which were big on “exotic” fashions. Arms trade might serve as a metaphor of imperialism, and the character might be meant to personify post-colonial guilt. A vestige of old-style capitalism, she now wanders the world in confusion and with a desire to atone for the sins of her forebears. However, Imelda fails to recognize the people she wants to help as people, that is, in identifying them as ghosts that haunt her she subconsciously denies them their humanity. “What did she do when she was alive?” she asks about one squatter. Imelda seems like an anachronism because she is a splinter of the epoch when the yawning gap between social classes was not concealed by liberal-democratic rhetoric.

The squatters’ status as “ghosts” might also attend to their being at the margin of society, their non-presence on the labor market, their virtual “invisibility.” Although squatting is stereotypically associated with specific subcultures (mostly punk), Wardill’s characters look like “regular people,” therefore they lack representation in popular imagination–the culture formed by mainstream media does not “scan” them. The squatters are fleshed-out, fully human characters that exhibit no ghostlike qualities, but their being social, cultural, and economic outsiders leads to their paradoxical equation with the undead (the extravagance of Imelda’s character underlines this paradoxicality). It has to be noted that Wardill does not want to show either Imelda nor the squatters as paragons of some mythical “authenticity.” An emphasis in the film is placed on acting, on straying outside fixed identity: several squatters spend their time try out different acting techniques, while Imelda’s psychiatrist advises her to think of herself as a character, and in the end she exclaims that she does not want to be described. She actually speaks about herself in the third person all the time. Confusion and precarity are never fully expressed, but always implied.

The architect Laslo is meant to be the bastion of rationality and “normalcy” against the irrationality of Imelda’s mind and the squatters’ living situation. He is an exemplary “creative industries” success story, works in a tasteful glass-walled office, and wears expensive but bland suits. He is wealthy, but he is Protestant to Imelda’s Catholic. His attitude towards the squatters is much more down-to-earth: he simultaneously views them as a nuisance and understands the need to protect them (“We can’t build if there are people living there”). We glimpse his magnificent building design, which makes ample use of organic forms, but that’s where the paradox comes in: building the structure would mean that the site would be denied the chance to develop organically (as in “people settling there without any predetermined plan”). Laslo disapproves of Imelda’s friendship with the squatters, but he finds himself drawn to the woman and the “spirits.” The film might also be telling a story of his yearning towards alternative ways of life, outside of the bloodlessness of “creative capitalism.”

The film conveys a sense of openness, instability, and mystery. It grew out of improvisations and workshops that Wardill held with actors and friends, which underscores the film’s emphasis on social interaction (indeed, there are hardly any scenes where any one character is alone). The work was also inspired by music created by Wardill and Marc Shearer, which took cues from the band Goblin’s horror movie soundtracks. You can see the film at Altman Siegel Gallery until April 14th; the screening times are available here. Keep an eye out for new Emily Wardill exhibitions at Altman Siegel.