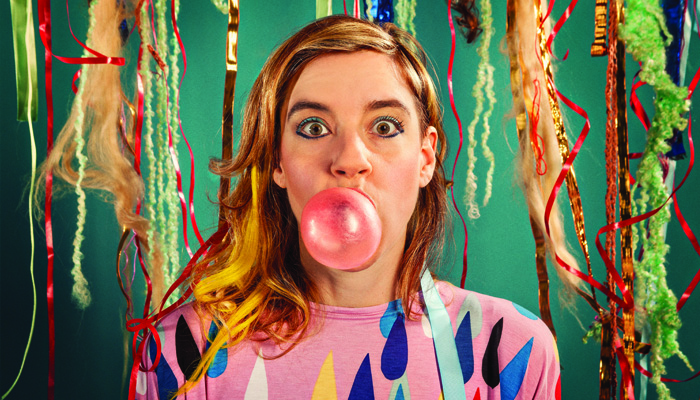 tUnE-yArDs is a collaborative music project created and led by New Englander Merrill Garbus, whose powerfully dynamic voice and attention to musical detail has proven to be nothing short of amazing.

The project was introduced to the public in 2009 when Garbus self-released her first album as tUnE-yArDs. The album, BiRd-BrAiNs, showcased a similarly stylized name as well as Garbus’ incredible talent in musical production, particularly in the realm of harmony and rhythm. Although the LP was originally recorded by Garbus with a handheld voice recorder on a recycled cassette tape, reaction to this new and refreshing style of experimental pop was so tremendously positive that the album went from a limited vinyl pressing to an international release in less than six months.

The project’s following release, stylized as w h o k i l l, took the popular momentum tUnE-yArDs experienced following the success of its first album and accelerated it to light speed. Not only did the second album bestow international recognition and acclaim upon Garbus and her crew, but it has done much to promote the experimental pop genre among mainstream audiences. Several music blogs and magazines–of both the mainstream and “indie” variety–proclaimed the LP as one of the top 50 albums on 2011.

By all accounts, tUnE-yArDs is off to a very, very auspicious start on the American music scene.

Selected for its most-assured historic value, this self-made video of “Real Live Flesh” off of BiRd-BrAiNs features Garbus’ experimental edge at its rawest while showcasing her incredible attention to sonic detail.

“Bizness” is perhaps the quintessential track from w h o k i l l, and proves that Garbus is a master alchemist when it comes to combining the complexities of experimental pop with mainstream pop sensibilities. tUnE-yArDs seems to have uncovered the philosopher’s stone while creating this album, and “Bizness” is nothing less than pure 24-karat gold.

It’s a rare event indeed to experience the rise of a new musician who has the musical chops and creativity to compete with even the most established acts, while at the same time possessing the poetic fortitude necessary to express the joys and discontent of an entire generation of young people. Also, there is a certain timeless ambiguity in Garbus’ sound that is impossible to pigeonhole into any one genre or type.

Even if you can’t really get into the tUnE-yArDs groove, trust that there is indeed something special going on with this project. Particularly for those who have yet to adjust their ears to the burgeoning lo-fi aesthetic, taking a moment to give w h o k i l l a listen will definitely help to expand their musical horizons. Like Revolver was for the Beatles in 1966, tUnE-yArDs’ sophomore effort is a near-perfect example of what can come from the right tools being utilized by the right combination of creative talents. And like Revolver was so many years ago, w h o k i l l is only the beginning of what promises to be a sequence of musical creations that will only get better over time.

While tUnE-yArDs’ performances at the two Coachella weekends promises to be historic events, there are several opportunities to catch Garbus and her crew at several venues in California. What’s more exciting is that she’ll be performing several of these gigs with another Coachella-featured, up-and-coming act: St. Vincent. If you’re in the San Francisco Bay Area, be sure to catch their April 24th performance at the Fox Theater in Oakland (which, incidentally, is the city where w h o k i l l was recorded).