A clear vision is a rare accomplishment for an artist in their first solo project. However, Sandra Vu of SISU has been honing hers down through her previous work, which includes being the drummer of Dum Dum Girls, like a musical journey to ultra-chic nirvana. Everything that came before was a step towards Blood Tears, her new solo album which is not likely to fade anytime soon. We had the opportunity to attend her show and talk to her a bit about performing with her new band, her set and album designs, and plans for the future.

Sandra Vu: Playing drums is so physical, I would say it is easier to “feel” because of the mechanics of it. But thank you for saying that because we are about three weeks into the tour so it can be a struggle to feel energized! A big difference between the two is there are boys on stage with SISU. Even though the music sounds dark, we try to have fun on stage and try to be loose and expressive.

I’ve seen in a few interviews that the new album was entirely your project, that you always had the final say. Did this cause creative tensions in writing and practicing the music for the album?

SV: No, it’s easier I think. Things get difficult when roles aren’t clearly defined. It’s very clear from the start in SISU so there’s no confusion. I wrote and recorded most of the music, and a lot of times I know exactly what I want. There’s wiggle room for the live interpretation, which is totally cool because I respect their opinions as well. My bandmates are so supportive, and they have helped me out so much. I couldn’t do it without them. It’s never like they are working for me, they’re working with me.

Did you single-handedly write all the lyrics and music for the album?

SV: Yes, this is a project that I started with my other bandmate Ryan Wood, who unfortunately cannot tour with us. It’s not a “band” in the typical, creative sense where we work with each other in a room to write together. I can play all the instruments so I tend to do so. Our drummer Nathanael Keefer did play almost all the songs on Blood Tears, however. I got to “produce” him and figure out the parts over the drum machine.

This new project is a lot darker than anything you’ve done before, is this because of personal preferences or changes that have happened in your life recently?

SV: I’ve always been drawn to darkness, slowness, and dissonance, but also melody and harmony. I consider the songs on the LP and EP to be a mix of both. Not really any one experience spurned this, I’ve always just liked these types of moods. Quite oppositely, I listen to a lot of melodic pop and happy sounding music to pull myself out of myself. 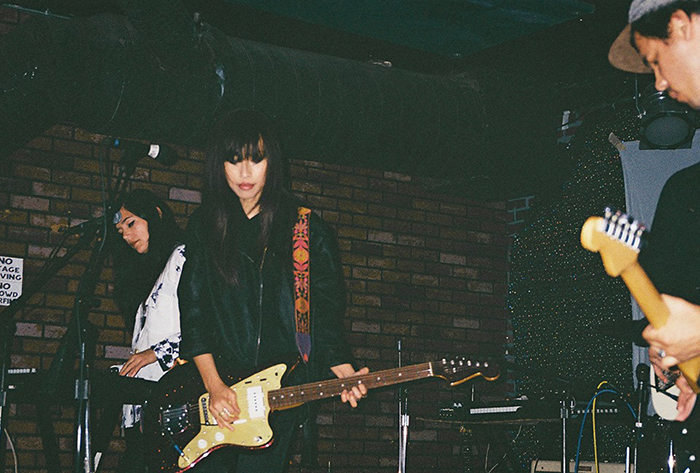 Where did the inspiration for “Harpoons” come from? Have you ever used a harpoon?

SV: No! I was really inspired by a synth sound that reminded me of a submarine, which took the song in that direction. The song is about power and growth. Harpoons or guns or any sort of weapons are dangerous statements and require maturity and strength to wield.

When and why did you write “Sinking Feeling”? What was this sinking feeling caused by?

SV: I’m afraid to spell it out because it is purposely vague. It is actually tongue-and-cheek and a bit sarcastic. It’s about someone who constantly wallows in their own pity and plays it for attention.

SV: That is completely baffling to me, but I think it’s maybe because she’s part Asian and I am Asian. Our music is so different and I am nothing like her on stage! I am a fan of YYY though, for sure, but I honestly have always used her as a counterpoint when I try to explain our show. SISU is moody and a lot of it is pretty mellow to me.

I’ve noticed you’ve changed your look a bit for this new act, including the unique eyeliner art you have going on, did you do this to help recreate yourself from your previous role in the Dum Dum Girls?

SV: I started experimenting a lot with eyeliner in DDG. We would paint our eyes every night, so we would just start trying different things. Jules, guitarist in DDG plays synth in this band. I definitely say don’t dress too Dum Dum. Each Dum Dum has a different interpretation of Dee Dee’s style, and SISU is just more of my personal style. No mini dresses and not as form-fitting.

A few people were saying that the eyeliner art, (which I love by the way) is a bit scary. How do you feel about that reaction?

SV: That’s pretty funny, but I like it. There’s an element of melodrama to SISU and I think that sort of theatricality is cool, without being overly costumed.

The artwork for the new album is also very dark, the image of blood tears coming from the eye. Where did the idea for this artwork and the concept of the album come from?

SV: One of the themes of the music is of vision and sight, and the “cut” is meant to symbolize pain and trauma of growth. I avoided using too blatantly the imagery of blood, so the color pops from the vinyl or cd inside.

SV: Yes, I’m going to make another record! We will tour more in support of the record and go from there. I was always working on this project, through any other bands I have worked with.

Read our coverage from SISU’s show in San Francisco

Get Tickets to see SISU