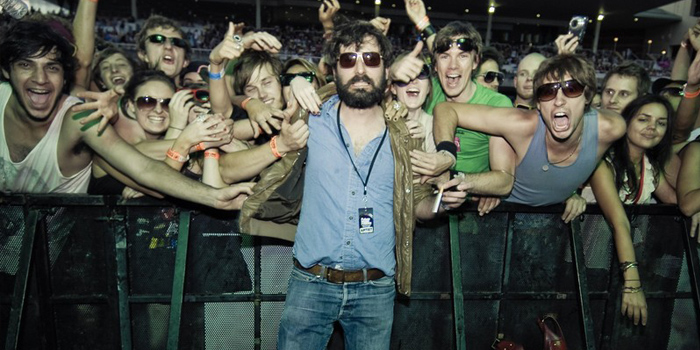 The incomparable Quentin Dupieux, better known as Mr. Oizo (pronounced Monsieur Wah-Zo), returns to San Francisco this weekend at Mezzanine for what is to going be a beautifully weird party. That is to say–the best party all weekend. One of the core staples of influential French House-music label Ed Banger Records, Mr. Oizo is credited as producer and provider of some of Uffie’s more crater inducing beats on tracks such as “Dissmissed,” Ready To Uff,” and “MCs Can Kiss.”

Mr. Oizo’s unique style of dance music is best exemplified by the song that first garnered him major notoriety, 1999’s “Flat Beat.” Sewed together by a repeated bass loop with a drum sample of “Put Your Love In My Tender Care” by The Flatback Band, the song was featured in a Levi’s commercial that followed a yellow puppet named Flat Eric adorably grooving along to the song whilst riding around in a clunker of a car. Flat Eric can also be found in the song’s official music video, which like the Levi’s ad, was directed by Mr. Oizo himself. Here’s hoping that Flat Eric will show up to party at Mezzanine.

The Parisian Mr. Oizo stretched his artistic and off-beat nature even further when he made his feature film directorial debut in 2007 with Steak. He followed that up with his 2010 absurdest thriller Rubber–a film that follows inhabitants of a small town plagued by a serial killing spare tire. Two other film projects include the feature film Wrong, which premiered at Sundance Film Festival in 2012, and the short film Wrong Cops, which premiered at Cannes Film Festival, also in 2012.

While dance music, and all of its sub-genres that invariably get lopped together, can sometimes run stagnate and monotonous, Monsieur Dupieux always delivers something different. The resulting music and film creations from that wonderfully warped mind of his is both refreshing, and often pretty damn good.

Also on hand at Mezzanine to lend their talents to open the show are stalwarts of San Francisco’s dance music community: DJ Dials, Richie Panic and MPHD.

Get Tickets to see Mr. Oizo

Catch More Events at The Mezzanine