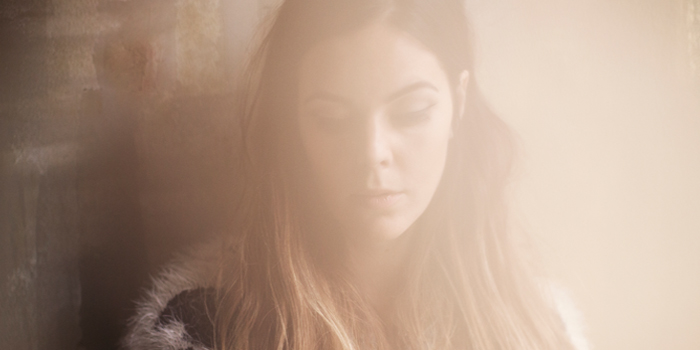 As Swedish avant-pop duo I Break Horses finishes up its North American spring tour with stops in San Francisco and Los Angeles, singer and multi-instrumentalist Maria Lindén took some time to answer a few of our questions about life on the road, performance inspiration and trying to eat healthy while on tour. Having released Chiaroscuro, the follow-up to its well-received 2011 debut LP, Hearts, earlier this year, the group’s blatant stylistic evolution on record and on stage has helped foster a distinctive musical ethos that is propelling the duo to new artistic heights.

What are some of the changes you’ve made to your stage show between touring the first and the second albums?
We’re using beautiful projections made by Dan Tombs and I guess we’re more confident on stage now. It’s easier to dance to some of the new songs. Our aim is to try to put people in some sort of trance with our dark Scandinavian appearance.

Do you tend to have an arranged set list that you play every night or do you change it up each show?
We usually start off with an arranged list, like a core of songs that I feel need to be performed in a certain order. But usually over time, it changes a bit…reordered and even some adding of songs.

How do you typically prep for a tour?
We rehearse and make sure the gear is OK. A big part of preparation this time has been rearranging the songs to work for a three-piece, due to the costs of bringing more people and gear overseas.

Do you have a pre-show ritual?
Oh yes. We usually play a song called “Tijuana Taxi” by the Mexican Border Brass Ensemble. That usually sets us in a good mood no matter how tired we may be. That and a shot of whiskey.

What’s a typical day like on the road?
A lot of driving. We have only been doing van tours, so basically we wake up in a motel surrounded by nothing and jump in the van for a drive to load in at the next venue. We also try to avoid all junk food places on the road, which can be quite hard. But Whole Foods is our latest discovery. A real gem, as healthier food really helps to stay sane. Or sane enough…

Is there a particular city with audiences that you look forward to playing for?
Every city has its own charm, so we have been looking forward to every show, really. Of course the biggest cities can be tough in a way, because they feel they have already seen it all. But I think that it’s the same phenomenon all over the world. At the same time, these cities have so much to offer a visitor on every level in comparison to smaller places. But like I said, we like every city and are really grateful to get the opportunity to tour the United States.

Do you have a preference between playing music festivals or concert venues?
Festivals are usually very stressful, with just a line check before the show. But on the other hand, you get a lot of people in the audience who may never have come to see you in a venue. So it’s a bit of mixed feelings. It gets more intimate doing club gigs and that’s nice.

Is there a difference between the audiences in Europe and the United States?
In capital cities it’s sort of global audiences behaving very similarly, I think. I guess it’s due to the rich amount of events taking place every day. But in general, we feel Americans are more outgoing and supportive.

What is your first memory of playing a good live show?
Well, we sort of jumpstarted by playing support to M83 two years ago, so I think those shows were a relief since we had quite good sound at the venues.

Do you have a favorite group that you’ve opened for or had open for you?
I like M83 and Sigur Rós, who we have both opened for. This current tour, we have Ryan from Rival Consoles opening for us and he’s also a great musician.

What was the first concert you attended?
I actually think my very first must have been my brother’s concert. He’s a classical pianist.

Are there any musicians who’ve influenced your performance style?
Musicians with integrity. You know, bands that don´t seem to compromise what they sound like or who they are just to gain fame.

What was the last good concert you’ve seen?
James Blake in Stockholm.

Get Tickets to See I Break Horses