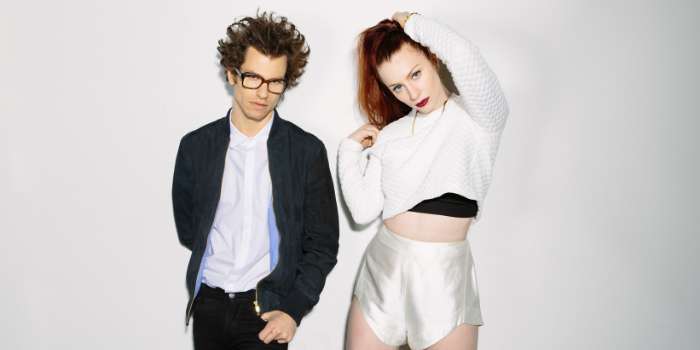 Photo Courtesy of The Agency Group

Star-crossed musicians Zoe Silverman and Adam Pallin met serendipitously before musical sparks flew. Well, they met through mutual friends, but you know how it goes. The two immediately knew they would create something worthwhile and took the time to cultivate ASTR, the dark R&B project that has boasted viral singles “Operate” and the Drake cover, “Hold On, We’re Going Home.” Brewing in Brooklyn, ASTR lies somewhere between soulful R&B and bass-heavy electronic, an edgy combination that came together on Varsity, its debut EP released by Neon Gold Records late last year. The two swag captains had a few minutes to chat with eventseeker about their past, their present and the sensual moves of Little Dragon’s frontwoman.

We know that you guys met at a yoga studio, but what’s the full story?

Zoe: So, Adam’s a Scorpio and I’m a Libra, and we were just destined to work together and be friends because they’re very compatible signs. We met through another friend who is also a Libra. Then everything just started while sitting in a cafe drinking green juice, not actually in a studio but at a yoga center. I knew Adam worked on many projects and we decided to write together since our astrological signs just fit so well.

What did you guys do before setting out on this project?

Adam: I was a corrections officer [laughs]. Not true.

Zoe: I liked that. I thought you were going to go with it.

Adam: [laughs] I know. I was going to but I didn’t want rumors to spread.

Zoe: No, Adam has always been a music nerd. I was a yoga teacher, for real, and wrote music on the side. Before that I was in many a girl group, but this was only natural for us to work together.

What’s the process of your sound?

Zoe: I don’t think there’s any real method. Usually he will start with a beat and then we’ll either chuck it or we’ll be like, “Yeah, there’s something in that, let’s navigate, let’s go deeper.” We’ll then put melodies on top of that with no words to feel it out. You should see my phonebook, it’s full of memos with lyrics and we’ll test them out. Sometimes they get lost, sometimes they end up in the trash bin, sometimes they prevail.

Where did ASTR come from?

Zoe: Well, Asteria is the Goddess of Stars and we also had a studio on Astor Place in New York, so it ended up being the name that we kept coming back to.

Has New York had an influence on your music?

Zoe: One hundred percent. In New York, you get to do your own thing. New York gives you perspective. When the weather goes back and forth you get more perspective than when things are just bright and sunny all the time. Los Angeles is harder because it puts you in this weird circuit of writing for pop music because everything is so shiny all the time.

Do you see yourselves staying in New York or migrating to push the music further?

Zoe: Definitely going to stay. We’re looking to get a studio to work out of in Brooklyn; there’s a nicer energy in Brooklyn. We do have to go to LA every now and then, but it’s cool that we don’t have to be stuck in one place anymore.

Adam: “I wanna be with you everywhere.” [singing Fleetwood Mac’s “Everywhere”]

You guys have played a few shows so far but have a full-on tour starting this summer. What are you looking forward to most?

Zoe: We’re really excited to kick off the Crystal Arcade tour June 11th. We’re working hard on a set that will step up the game visually and sonically.

What’s your favorite track to perform?

Zoe: “Part of Me” is really fun because a lot of people don’t know it. It just goes along really well. “Operate” is the showstopper, hands down. It’s always the “We’re here, we did it!” type song.

For your live set, are there any artists you try to emulate?

Zoe: Dude, I feel like every band we see there’s something going on that we love. We saw Little Dragon at South by Southwest and she has this whole musical breakdown. She was singing and went to each person in her band and danced with them. The flow of energy was super cool. That’s just one example though. Adam saw ODESZA and was taking notes on their lighting and this and that. Their branding is genius. They had this little art installation where you take pictures behind the ODESZA faces. Every show we go to, we take notes. Even years ago, when I went to see Charli XCX, she was so wild on stage. She was just moving and banging, and I loved her energy because she just didn’t give a f*ck. It’s such a collective. I can’t explain enough that music is a collective and we feed off of each other. That’s what is so cool about it.

Exactly, Little Dragon is known for having super strong energy on stage. One of our favorite sets from Treasure Island Music Festival this past year.

Zoe: Mmmhmm. She doesn’t move very much too. She can move in this sexual way but it’s not abrasive. It feels kind of fairy-like, almost heavenly.

Do you have a dream venue on the horizon?

Zoe: I feel like I’m such an amateur. I don’t know any venues. Wherever the most people will see us?

Zoe: Yeah! Different places we’ve never been. A milestone for us was selling out Bowery Ballroom, because we’ve seen so many shows there. I actually think Terminal 5…duh. Selling that out would be a huge step for us too. Then after that, Barclays Center. Woot woot!

Adam: In San Francisco, we’ve had good shows too.

Zoe: Yeah, San Fran has been great. I’m excited to go back and see the other spots.

Zoe: MONEY. You know, it takes work to get a record deal and then you finally get money but then it goes to so many people to make this thing actually work. We realized quickly that money is an issue. When you’re on a low budget like us, and you’re new and indie, it’s a constant thing that you need to keep your eye on. You don’t want to get wrapped up in money because it’s just money at the end of the day. But it’s important to get us places.

Get Tickets to See ASTR