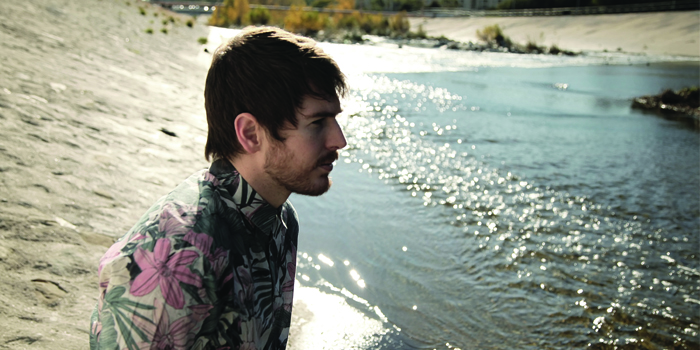 After impressing Dan Whitford and Tim Hoey of Cut Copy with his 2011 debut singles “Relocate” and “When You’re Out,” Los Angeles-based musician Ronald Kaufman, who performs and releases music under his Kauf moniker, was signed to the group’s label, Cutters Records. His electronically minded style capitalizes off slow groove builds and wanton rhythms, and manages to fit perfectly within Southern California’s music scene. Releasing his debut EP, As Much Again, and opening up for Cut Copy on the West Coast stretch of the band’s North American tour in 2013, the talented songwriter’s notoriety has continued to grow as he evolves as a musician and continues work on his awaited full-length. Answering a few of our questions, Kauf tells us how Los Angeles has influenced his sound, what his experience at South by Southwest this year was like, and what he does to get his blood pumping before a concert.

How did you get connected to Cut Copy and its label, Cutters Records?

It was completely out of the blue—one of those emails you hope just pops up one day. A friend of Dan’s showed it to him and simultaneously I believe Tim found it on a blog. Then, apparently when Tim showed the music to Dan he had already just reached out to me. Worked out really well.

Are you working on any new material at the moment?

Tons. I’m pretty close to finishing a full-length record. I hope to finish it all within the next couple months. I also have a couple remixes that will come out soon for Poliça and Labyrinth Ear. Also, I’m working with Jenny Baumert on an underwater music video for “The Closest,” which should be out in a couple months. She’s amazing, so I’m pretty stoked about it.

How has living in Los Angeles affected your sound?

LA can be a bit isolating because it is so massive and spread out that you really have to work to keep up with friends. Not sure if that isolation comes through in the music, but I am a bit of a loner and LA easily allows a certain kind of anonymity that I like.

Also, our Craigslist here is an amazing source of good deals on vintage gear, etc. The equipment I’ve purchased locally has directly shaped my sound. I’m a big proponent of purchasing gear and working outside of the computer when possible to differentiate your sound and put some limits on yourself and your sound palette.

Are you planning any shows or a tour at the moment?

I’ll be playing my first big festival in California later this year, though I don’t think the lineup has been announced yet. Also, a Cutters Records tour is in the works.

You played SXSW this past year. Could you describe your experience there?

It was a bit crazy but overall a great experience. I stayed in a small house with 11 people. There was much sleeping on the floor and drinking, though my share of partying was very minimal because I had to perform multiple times. It felt like a short summer camp and I made some great new friends.

I thought there was a bit too much going on though; too many venues and schedules to keep track of, and the venues were so small that I couldn’t get into some of the shows I hoped to see. But everyone who came out to my shows was really supportive and I’m very glad I went. Favorite shows were Poliça and Agnes Obel…bummed I missed Future Islands.

Do you have any pre or post-show rituals?

I don’t drink before shows, so just doing anything to get my blood running, like jogging a bit, etc. Otherwise, when I first get on stage it’s harder to get into it.

Do you tend to have an arranged set list that you play every night or do you change it up every show?

I change it up sometimes but do have a set list I prefer if I have a big enough time slot.

How have your concerts changed or evolved since you first started playing live?

My first live shows were actually DJ sets with just two of my own songs that I sang over. I basically had the songs separated into two prerecorded tracks so I could filter the main melodies without affecting the drums. Now I play only my own music, have the songs broken down into many sections that I can extend on the fly, and play a lot of the sounds live on a keyboard and MPC pads. I’ve also programmed my own light show with Max 4 Live.

Is there a particular city with audiences that you look forward to playing for?

I really enjoyed playing Portland on the Cut Copy tour. They seriously like to get down.

Do you have a preference of playing music festivals or concert venues?

So far I much prefer concert venues because you get a proper sound check and it’s just less rushed overall. But that could change as I play more festivals.

What do you do for a job?

I’m only doing music right now, in addition to some writing, mixing, and production work for other artists.

The very first time I sang over a couple of my songs was actually at a beautiful private club in Mexico City called M.N. Roy. I was lucky that the director of my first video set the show up, and it was really inspiring to see how much people were responding to the music and dancing even though most of them had no idea who I was.

What was the first concert you went to?

Are there any musicians or bands that have influenced your performance style?

In 2006, I saw Imogen Heap live and was really impressed with everything she was doing on stage by herself. So there’s some influence there, but I want to form a full band to support the next record so I can hopefully get out from behind the keyboard and move around.

What was the last good concert you’ve seen recently?

I just opened for Jungle at the El Rey and they were pretty phenomenal. Sound was great and they got the entire place dancing.

Get Tickets to See Kauf