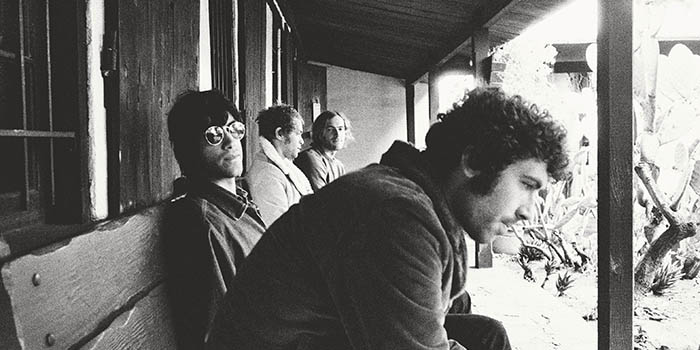 Allah-Las has spent the summer performing its grungy surf sound throughout California, with a full schedule continuing on in the coming months. The band took some time to chat with us about its Los Angeles influence, touring, and the process of writing an album. Our contributing photographer, Oscar Francisco Montes, caught the group’s Long Beach Summer and Music show on June 28th. Check out his photo feature and the interview below.

You guys first met while working at the Hollywood Amoeba Music store. What are some funny memories you have from those days?

Three of us actually went to the same high school, and then Matt and Spencer met Pedrum a few years later while they were all working at Amoeba. They all started by working in the back of the shop, switching used CDs from old jewel cases to new ones. All the best stories come from the back.

How has Los Angeles’ musical history influenced your sound?

What’s the background of your band name?

We wanted a name that sounded sonorous and had a ring to it. We were singing lots of backup vocals in the beginning and it seemed apropos. People seem to think we have an agenda behind it but that’s simply not the case.

Is the songwriting process collaborative or is there a primary songwriter?

What preparations did you undertake for this current tour?

Plenty of rehearsing, developing the best way to play tracks from our new record in a live setting. We have had our good friend Jeff along on this tour to play some percussion as well, which has added a nice element to the sound.

Too much driving! We try to stop at points of interest along the way when we can. We are coming from Salt Lake City and stayed in Lake Tahoe last night, so we got in the water this morning. Things like that help break up the monotony.

Get Tickets to see Allah-Las