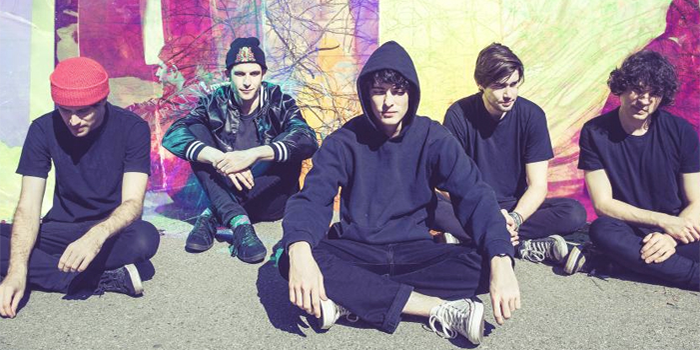 Blending psychedelia with unabashed pop sensibilities and elements of electronica, White Arrows has crafted a distinctive sound that fits in well within the confines of its city’s sprawling music scene. The band released its debut album, Dry Land Is Not a Myth, in 2012 and is set to release its sophomore effort, In Bardo, later this year. Touring the country opening for alt-rock act The Neighbourhood this summer, singer/songwriter and guitarist Mickey Church answered a few of our questions, telling us about eating odd food while on tour, occasionally practicing primal therapy before shows, and how the group’s concerts have evolved since first starting out.

Do you plan on road-testing any of the new material off your forthcoming album on this tour?

Yes. We are playing a lot of new stuff on this tour–nearly half.

How did you get connected to open up for The Neighbourhood for this tour?

We played a few shows with them before we played Coachella last year and became friends. Then we hung out at a festival more recently and they asked us to come out with them.

How do you typically prep for a tour?

Since we have so much new material and have been in writing mode for so long, we’ve needed to practice a lot. We also reworked all the old songs that we’re playing and doing things differently. Also, we have new visuals that we needed to get linked up.

Being tired, getting to places late, and eating weird foods.

Do you guys have any pre or post-show rituals?

How have your concerts changed or evolved since you guys first started playing live?

They’ve changed a lot. We sometimes jam in our sets, get heavier, and just always try to do things differently.

How do you pass time between driving from cities that you’re playing at?

Is there a particular city with audiences that you look forward to playing for?

I always look forward to playing New York. I used to live there, so it’s nostalgia for me to go back and play.

Do you have a preference of playing music festivals or concert venues?

They’re both cool for different reasons. Festivals are fun because it’s like summer camp for bands. Venues are cool because it’s more focused and it’s darker inside.

What do you each do for day jobs?

This is it. We all just finished school, so we’ve been solely working on this pretty much and DJing in between tours.

I can’t really remember, but I wasn’t satisfied for a really long time.

What was the first concert you went to?

My uncle took me and some friends to see Smashing Pumpkins at the Great Western Forum when I was young.

Are there any bands that have influenced your performance style?

Tons, I’m sure. I like everything from theatrical performances to classic rock to electronic.

What was the last good concert you’ve seen recently?

I saw Queens of the Stone Age for my first time and they were amazing.

Get Tickets to See White Arrows