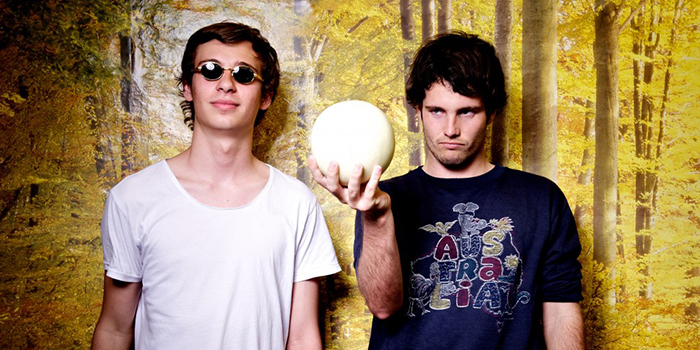 What So Not is a Sydney-based group specializing in electronic music with hip-hop and house influences. The duo is made up of DJs/producers Flume and Emoh Instead, who released a debut EP, 7 Dollar Bill, together in 2011. Since then, the two have had one major objective–to make music that’s fun (they both share a love of surfing, so this is almost a given), and if people happen to come up with new dance moves to their songs, even better.

The Aussie group’s biggest single so far, “Jaguar,” draws listeners in with an irresistible beat and soaring house-inspired vocals that give the song a distinctive pop flavor. The track channels the feeling of house music from years ago, but dresses it up with bass and hip-hop elements for a new generation.

This weekend, the duo will be bringing its playful beats to Shambhala Music Festival in British Columbia as part of a North American tour that includes both nightclub and festival appearances. The group’s fun-loving attitude coupled with the incredible sound system and lighting design of the Pagoda Stage is sure to make for an unforgettable show on Saturday night.

So far this year, What So Not has made appearances at Lightning in a Bottle and Electric Daisy Carnival in Las Vegas, and has toured across the country with Skrillex. Along with Opiuo, Goosebumpz, Whitebear, and Kalya Scintilla, the duo is further proof that Australia has become an epicenter for electronic music.

Get Tickets to See What So Not

emoh instead Flume shambhala shambhala music festival what so not