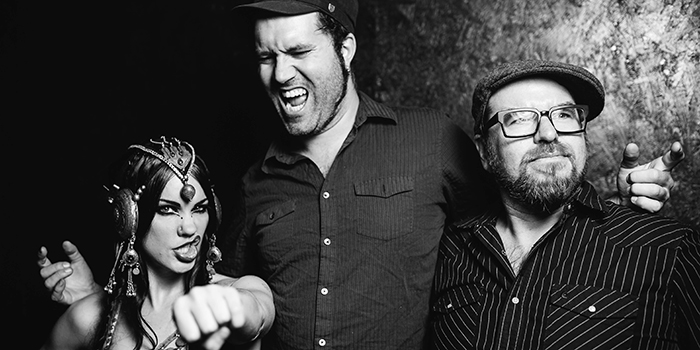 Beats Antique is widely known for its experimental and interactive performances featuring bellydancers in headdresses, animal masks, and audience participation. The trio is busy gearing up for its upcoming Creature Carnival tour, coming this fall. David Satori and Tommy Cappel took some time to chat with us about the tour and what to expect from them at Shambhala Music Festival this weekend.

In past interviews, you’ve mentioned that your shows have a story to them (like Joseph Campbell’s hero archetype). Is there a story to your current show? What is it?

David: We wanted to make it a really festive, fun event for people – more of a destination kind of thing, where people can dress up and have fun. We’re actually right now in the midst of conceptualizing some elements of it. It could change, but we have come up with ideas for having four characters for the audience to participate in and be. We’re going to make masks for the audience to wear and be these four characters. A bird, a rabbit, a tiger, and a fish/squid/animal/creature. So we’re trying to get our audience to participate in a way they haven’t before, by dressing up and embodying these characters that they wish to be, or creating elements that they choose. They can develop it even further if they wanted to and go deeper. We’re just trying to create a fun, participatory event and make it different from just a normal rave. That’s for our fall tour, not for Shambhala Music Festival.

Your most recent shows feature a gigantic inflatable Cyclops cat–where did the idea for this spectacle come from? What was the inspiration?

Tommy: We had a friend, Ben Taylor, build us an inflatable squid for our previous tour and that was a lot of fun. It worked really well, and when we were writing the show for A Thousand Faces, there was a moment where you’re sort of brought into another dimension and it’s like a gameshow. It comes to this point where you have three things you can have, like the doors of destiny. And your destiny ends up going through the wormhole into chaos. And the Cyclops kitty comes out and shows you, “Yup, you’re here. You’re in a wormhole”.

When you tour, you headline shows at venues and also play at festivals. What’s different about playing at a festival and how do your shows differ? What elements of it are you trying to bring to Creature Carnival?

Tommy: They’re totally different experiences for the audience and for us. Venues, you go in and you’re in control of the whole place all day long, you can set up a bunch of stuff, soundcheck however long it takes, program all the lights. You make your show happen, kind of relax all day, and then bam, you hit the show and it’s this experience. At a festival it’s totally opposite. You just throw your stuff on – we call it “throw and go.” You’re with a bunch of people who are just like, “Get me! Take me on a journey!” You amp up your set a bit ,and keep it going and keep it alive. I think for this tour, we’re looking at it as a combination of that – we’re definitely trying to keep up the energy, keep the show going, like you would at a festival, but it’s a venue.

Over the years, you’ve played your fair share of sets at Burning Man, where none of the artists or performers are paid. What is it about the festival that keeps you coming back, and has it had any effect on the development of your music or performances over the years?

David: We all went to Burning Man individually before we even met, so we were already the certain kinds of artists and the kinds of people that would go. Especially back then, when it wasn’t as popular. It’s definitely become more popular, which is great because it’s a crazy place. It’s influenced us as artists because of the sort of sense of freedom–inhibitions are gone, people are doing what they want with this freedom of expression. This sort of wild, utopian place people go to be themselves and be who they want to be, so I think that influences us. Also, the ruggedness and craziness of it. It feels like you’re on another planet at a certain point. And it’s also the community. It’s a whole sort of counterculture that we came out of in the Bay Area and at Burning Man. It’s just the result of who we are and who we are as artists, and we’re proud to be part of it. We always sort of do it last minute these days. Our lives are so crazy and our schedules are so crazy. Who knows, we might be there, we might not this year.

Tommy: After you’ve done it for 10 or 15 years, it’s sort of fun to do it last minute. That’s actually my favorite part. The last minute, “Alright, we’re going to Burning Man. Boom. Make it happen.”

David: Once you’ve been going for a while, you realize you don’t need anything out there. All these people bring so much stuff, but you just need like a bike and some water and a place to crash. But I don’t recommend that for people who are going for the first time.

You’ve done Kickstarter campaigns for previous tours, would you do it again?

Tommy: We’d do it again. Kickstarter is a fun process. It’s like, (money aside), what happens during a Kickstarter campaign is that you’re motivated by people’s interest in the project to actually show them what you’re doing and prepare them and get them excited. It’s a great way to bond with your fans and know that there are people out there who really want something to happen. And when you bring the money into it, you feel a sense of responsibility to them to come through. So it’s a good motivator when you’ve got a big project ahead of you. With the tour, it was really fun because it got us to make videos, show our progression, and really take it seriously. I think it’s something we’d do in the future again.

David: I think it’s a great model for the DIY artist, artists in general, and just motivated people who have an idea. Anyone can do a Kickstarter for anything. It’s a really good way to get your ideas out there.

Tommy: Even if it doesn’t work, it’s a really great process to go through. It really gets your mind focused on your project.

Does that feeling of a sense of responsibility to fans come through when you’re actually on stage performing, knowing that people in the audience helped you get there in the first place?

David: Oh yeah, for the last Kickstarter for A Thousand Faces, we included our audience by asking them to draw faces, and then we animated them. That was one of the things we showed throughout the Kickstarter. We posted people’s faces and how they were going to be part of it. We were inviting our crowd to help do this. Donate money, but you can also be part of this project.

What can we expect to see from you at Shambhala?

Tommy: We’re playing the Pagoda Stage, which is a wild stage, and they have this whole video-mapped crazy world that you’re going to be entering. I think it’s going to be a sensory overload, fun experience. It’s gonna be me and David doing a live set.

David: It’s not going to be so heavy on the performance element. It’s gonna be more about the stage and the crowd and the video/light world they create there. Tommy and I will be playing live drum set, I’ll be playing violin and banjo. It’s going to be more of a rocking out, party set. We’re going to try to get people dancing.

Get Tickets to See Beats Antique