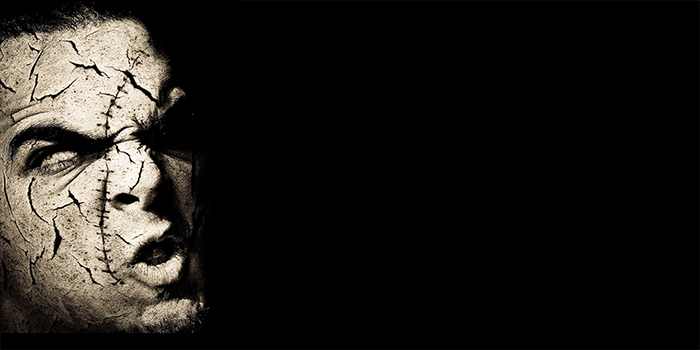 For the second straight year, Oakland’s New Parish plays host to a night of horror films, burlesque, and blood spatter. We caught up with Jamie DeWolf, one of the show’s cohosts and a veteran producer of Oakland underground events, for a little rundown of what we could expect from Screamfest’s sophomore year.

What goes into putting together and hosting a festival like Screamfest? Can you tell us a bit about the event itself?

They ended up asking me to host it as well, and after the second year of doing Briefs and seeing the caliber of talent and all the different skill sets local filmmakers are bringing in to it I realized, how come we don’t have a horror festival? When I would approach filmmakers with like ‘do you have any erotic shorts’ or anything like that, they would have horror shorts. I think it’s a genre that’s awesome and the East Bay Express is pretty fearless about what they would choose for their films, and I thought that fearless aesthetic could be brought to a horror festival. So we came up with Screamfest and a lot of it is spearheaded by the East Bay Express.

It has local films and local filmmakers, but films can be accepted from all over. There’s a $1,000 audience prize and $500 jury prizes selected by judges, and it incorporates a lot of my background in vaudeville and performance. We picked horror burlesque acts and a lot of them were specifically requested to incorporate different horror films and create new acts based off of those. Last year we had a Pinhead Hellraiser act and we had an Alien act, and the screenwriter of the first Friday the 13th film was actually one of the judges. So Spunky Brewster and Ophelia Coeur De Noir created an entire act that was reflected from Friday the 13th, one of them being a bloody cheerleader and one being a crazed homicidal mom with the wig and they’re ripping clothes off.

How do you make sure these filmmakers get the respect and engagement from the crowd they deserve?

Because I’m a filmmaker and performer myself, when we were trying to design the setup, it was important that the filmmakers get a lot of love, because in a way, it’s their party too. Screamfest isn’t about winning, it’s about celebrating the fact that they finished films and that they’re awesome.

I also think it’s a smart choice to have Screamfest in a club, bar-type environment, where people are respectful while the movies are playing but also has a much more raucous environment than your typical kind of sit-and-stare movie theater. It’s a lot more interactive. So I’m really big on trying to make things as interactive and live as possible, and getting away with the voyeuristic approach to art.

So actually, it’s broken up into some blocks. There’s a block and then some live horror burlesque performance, and then time to get drinks, another extra block with more performances after that. So there are some elements to keep people involved in a show more than a regular festival.

Most of the events you put on don’t have that ‘sit-and-stare’ approach, but you’re actually getting people to kind of contribute to this atmosphere. Why is this important to you?

In general, I’m always trying to push people to be more involved just because I come from both sides. I’m a performer, but when I put together shows, I put together shows that I would want to see. So in a way I kind of know what a performer would want in terms of reaction and then set the frame so the audience knows what the ground rules are. You’re encouraged to respond to what’s going on on-stage and I think the film festival is the same sort of way.

You see this happen when you go watch fights or you watch a sporting game. People are allowed to be drunk and maniacal and screaming and hootin’ and hollerin,’ and I feel like there’s a fair amount of art there. While you gotta be respectful of what a performer’s doing, that kind of anarchic energy is awesome if it can be channeled in the right way.

What titillates you? What do you look for in a performance?

It’s always pushing the envelope. It’s who’s gonna go extra and do something that’s challenging. Whether it’s shocking, whether it’s controversial, whether it’s explosive or messy. Sometimes when we’re putting together Tourettes, I’ll be like, “you know there’s not enough mess in this,” and we’ll try to figure out a moment of something completely messy like watermelons exploding or meat flying across the room. Something that just shakes you out of just sitting there being a voyeur.

We’re kind of trained most of the time to sit and just watch art, but a lot of good art provokes you in a way. So for me, it’s pushing buttons and what’s making people feel alive in that moment. I think some of the ways that you do that is with a certain degree of unpredictability. In Tourettes, we don’t have programs telling people what you’ll be seeing throughout the night. I’d rather have them not know what to expect because it makes it more electric, it makes it more spontaneous, it puts people on edge, which is what I want. You add a little bit of an outlaw sensibility to it, and if an audience senses that they have more freedom for themselves then they’ll become a larger part of the show and it makes it more real.

Screamfest will be at The New Parish in Oakland on Thursday, October 16. Filmmakers with a piece under two years old and 10 minutes long still have until September 22 to submit their own shorts for consideration. For more details and to purchase tickets, head to East Bay Express.

Get Tickets to Screamfest