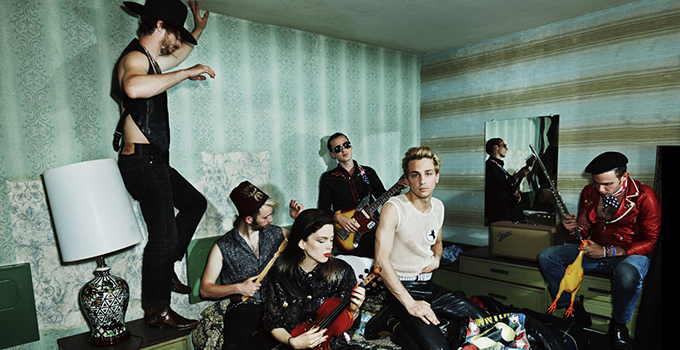 It is of no surprise that surf music–and more specifically, surf itself–played an important role in the initial success of the band La Femme. The founding members of the band, Sacha Got and Marlon Magnée, first started making music in the idyllic French surf town of Biarritz, where they met a few California surfers who helped them make the necessary connections to embark on a tour of the American West Coast. While the remaining members of the band joined in Paris, far from the crashing waves of the Bay of Biscay, La Femme has found great success as France’s premiere surf-rock band.

With the release of Psycho Tropical Berlin in 2013, the six-piece band showcased a burgeoning talent for blending psychedelia, electro, and even 1960s yé-yé with undeniable surfer guitar to create a sound that is varied, unique, and thoroughly modern. La Femme’s songs range from bouncy, danceable pop tracks to seductive and moody songs meant to be heard in a sweaty underground Parisian club. The album is best explained by Magnée in the band’s press release: “It’s a melting pot of strange, hypnotic, and mental moods (Psycho), sunny, positive vibes and beachy surf (Tropical) and cold, binary electro (Berlin).” In fact, variety is one of the album’s most alluring characteristics. The almost-instrumental track “Antitaxi” brings to mind a hurried chase through the streets of Berlin, as seen in an old black-and-white horror film. However, a soft and playful side to the band’s vibe is clearly heard on “Nous Étions Deux” and “Hypsoline,” the latter of which is reminiscent of the sexy vocals of Serge Gainsbourg and Brigitte Bardot. “Amour Dans le Motu” is easily one of the most energetic tracks on the album and features an irresistibly catchy beat, and delicately sung French lyrics.

The extended version of Psycho Tropical Berlin contains a generous sampling of the band’s previously-released tracks, including a breathy cover of Chuck Berry’s “Oh Baby Doll,” which was recently used in a Saint Laurent campaign with Cara Delevigne.

Currently, La Femme is halfway through a West Coast tour that includes a stop at San Francisco’s Slims on October 30. Afterward, expect to see the band at Iceland Airwaves in November.

Get Tickets to See La Femme