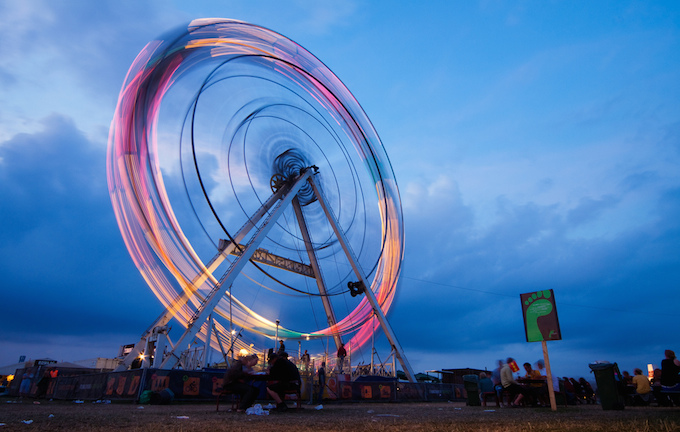 Summer is in the air, and that means June festivals are right around the corner! Cities all over the world are hosting multi-day music events this month, so pack some sunscreen and rain boots and warm up your best dancing skills for these upcoming festivals.

Sweden Rock Festival // Blekinge , Sweden
Dates: 3 June – 6 June
Details: Sweden Rock Festival has the most epic throw-back metal line-ups in the history of rock festivals! Legends like Slash, Mötley Crüe, Hammerfall and Def Leppard are all coming together to take down the pretty little town of Sölvesborg. Unfortunately the festival is already sold-out, but if you’re a true hard rock fan, mark your calendar for next year’s Sweden Rock.

Rock am Ring // Flugplatz Mendig, Vulkaneifel, Germany
Dates: 5 June – 7 June
Details: For its 30th anniversary, Rock am Ring invited heavy hitters Marilyn Manson, Motörhead, Bad Religion, Slipknot and Rise Against to celebrate with them. June is a rainy month in Vulkaneifel, so there’s a high chance the festival grounds will get a little muddy. Make sure to pack some water-proof clothing before you make your way to Deutschland!

Nos Primavera Sound 2015 // Porto, Portugal
Dates: 4 June – 6 June
Details: Located in a beautiful park by the ocean in Porto, this festival provides you with the perfect atmosphere to zone out and get lost in the music of artists like FKA Twigs, Interpol, Belle & Sebastian and Mac DeMarco. Combine your festival visit with a little surfing trip if you like, since Porto is also famous for its amazing surfing spots.

Field Day Festival // London, UK
Dates: 6 June – 7 June
Details: Featuring newcomers like Chet Faker, Cholombian, Gaz Coombes and Beach Baby, this London festival is a great way to discover new artists. Ultra-cool veterans FKA Twigs and Mac DeMarco are also going to be there, and we’ve got our fingers are crossed that they’re sharing a plane straight from Porto.

Governors Ball // New York, NY
Dates: 5 June – 7 June
Details: Where do I even start… The Governor’s Ball features pretty much every artist that’s hot right now. Located on Randall’s Island with the Manhattan skyline as its backdrop, the festival is the perfect opportunity to celebrate the beginning of summer. Catch all-time favorites such as Noel Gallagher, The Black Keys, or Lana Del Rey amongst newbies like Holychild or The Picturebooks.

Bestival // Toronto, Canada
Dates: 12 June – 13 June
Details: If you like electronic music, Bestival in Toronto might be the right festival for you. Despite the fact that Florence & The Machine and Nas are the headliners this year, Bestival presents a solid lineup from the international EDM scene. This is no massive dance music conglomerate though — Bestival is a boutique festival that’s all about spreading peace and love. Free hugs included.

Novarock // Pannonia Fields, Austria
Dates: 12 June – 14 June
Details: As its name suggests, Novarock is all about rock music. This year, Austria’s biggest music festival features headliners like Rise Against, All Time Low and The Gaslight Anthem. No commodified stadium rock here, but you might stumble upon two or three traditional Blasmusik artists who mock the typical Austrian music scene.

Bergenfest // Bergen, Norway
Dates: 11 June – 14 June
Details: Held in a park in Bergen, this pretty little festival showcases Norway’s vast pool of artists. Get ready for Scandinavian pop and indie at its best. With the exception of international headliners like Bastille, Ben Howard and Tori Amos, this year’s Bergenfest is a Norwegian-centric affair.

Amnesia Rockfest // Quebec, Canada
Dates: 18 June – 21 June
Details: Rockfest Quebec is like the high school reunion of 1990s and early 2000s rock bands. From Deftones to Sublime and The Offspring, if you’re in your late 20s or 30s, this festival will deliver a potent dose of nostalgia.

Roskilde // Roskilde, Denmark
Dates: 27 June – 4 July
Details: Featuring an incredible line-up with over 200 artists from all over the globe, the largest music festival in Northern Europe never disappoints. Just sayin’… it will always be a big deal to see Paul McCartney live.