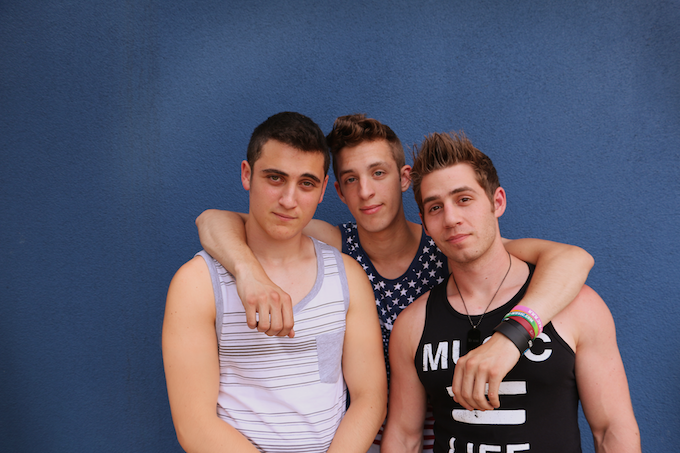 The Vans Warped Tour is the perfect opportunity for up-and-coming bands to bond with established musicians. One of those freshman acts — or “Baby Bands” — for 2015 is 3PM. We got a chance to spend some time with the trio from Baltimore and got to know a little bit more about Brandon Stark, Scott Montgomery and Brennan Millman.

Warped Tour just started. How have the first couple of days been for you?

3pm: The first day in LA was incredible. It’s a lot of fun getting to know the atmosphere at Warped Tour. It’s like punk rock summer camp. Everyone is so close, looking out for each other, having fun and enjoying themselves. It’s very cool how everything comes together this way.

This isn’t your first Warped Tour experience though.

3pm: After winning “Battle of the Bands” we got to play during the Maryland stop. But this year we are doing the whole thing. We are working every day and sometimes get to play. We are the “baby band” this year. In case someone gets sick or a spot opens up we get to play.

And I’m sure you are ready for it! So tell us a little bit more about your band. How did you meet?

3pm: We met over Facebook. I (Brandon) decided to start a band and I looked through everyone I know. I checked for same musical interests. “I like Blink-182, he likes Blink-182! Let’s start a band.” After that we became best friends.

When you formed the band, what made you decide on a trio?

The instruments you play, you are mostly self-taught. How would you say that defined your style and your song writing?

3pm: Being self-taught is what punk rock is about, because you are doing things out of the box and getting influenced through different genres. Being in the band and with the others makes you better. We took some lessons but what really improves you is playing with others. We listen to Blink-182, Sublime, The Beatles and As It Is and they influence our style as well.

You must be super thrilled to be on the road with As It Is then. While going through your history I stumbled across you mentioning All Time Low a few times. Are they big influences as well?

3pm: All Time Low is definitely one of our bigger musical influences. Probably the most modern one. We got to play with them at a charity gig before. And we recorded our first album with the producer of their first music, Paul Leavitt. It was cool meeting and playing with them. Since then it’s quite often that lyricly and music-wise we think “How would All Time Low do it?”.

On the current Warped Tour, did you discover some new bands? And which of the known ones are you looking forward too?

3pm: We just checked out Beautiful Bodies. Their set was sick. We are looking forward to see As It Is, Neck Deep, Seaway and Pierce The Veil. If there is one band we can shout out to it’s Boymeetsworld. They were the catering band last year and we basically following in their footsteps. They’re really great guys and the music is absolutely worth checking out!

To wrap it up, what are your expectations for the rest of the Warped Tour?

3pm: We are looking forward to make a bunch of new friends. Working with the others, hanging out with them for pretty much the entire day. Just talking and enjoy the time here. Well that’s what Warped Tour is all about.