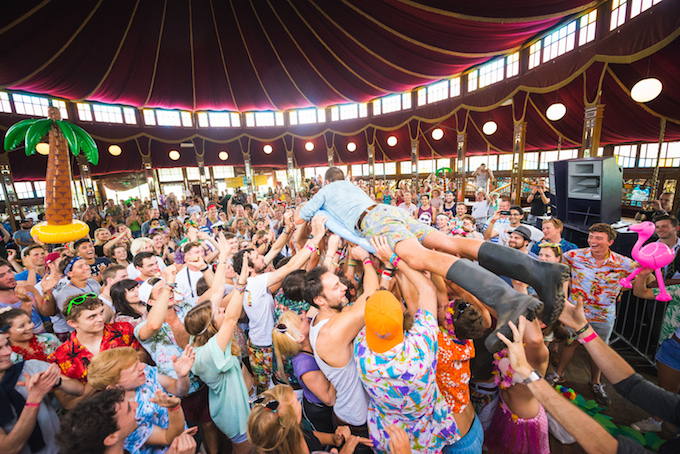 September may mark the end of summer, but at eventseeker, our lineup never ends! Here are our picks for the top ten September festivals in the world. We’ve done the research, now the only hard part is choosing which ones to attend.

1 // Lollapalooza // Berlin, Germany
Dates: September, 12-13, 2015
Details: Ah Berlin! It has history, it has beer and now it has the first European edition of the iconic Lollapalooza festival. Blending alternative rock, pop, heavy metal, punk rock, hip-hop and EDM, the event will feature renowned headliners like Muse, The Libertines, Sam Smith, Bastille, Stereophonics and Fatboy Slim, while also exposing music fans to a new generation of artists. We’ll be at the inaugural Lollapalooza Berlin, so check back later this month for our exclusive coverage!

2 // Burning Man // Nevada, USA
Dates: August 30-September 7, 2015
Details: Musicians, sculptors, artists, dancers and dreams — this festival is for you. If you can afford it. Inaugurated in 1986 on San Francisco’s Baker Beach, the festival moved to the Black Rock Desert in Nevada and expanded into a week-long affair of art, music, camaraderie and debauchery with over 65,000 participants gathering together as a community. That’s all fun and dandy, but a bigger and more popular festival does have its downfalls. A ticket to this year’s Burning Man is 390$, and that’s at face-value. Re-sale websites and Craigslist offer tickets closer to $1000 a piece. If you can pay the price, you get to enjoy the other-wordly villages, endless music, pyrotechnics, art installations and other surprises that are designed to transform the world around you. This year’s theme is Carnival of Mirrors, and we can only imagine what the masterminds behind Burning Man have in store.

Drone's view of Burning Man 2014 from Eric Cheng on Vimeo.

3 // Bestival // Robin Hill, Isle Of Wight, UK
Dates: September 10-13 2015
Details: As its name suggests, Bestival has risen as one of the most buzz-worthy festivals in the UK since it was founded in 2004. Winning the Festival Awards for Best Major Festival in 2010 and 2012 as well as the Fan’s Favourite in 2011, it is beloved by both music professionals and fans alike. With multi-generational appeal, Bestival 2015 will feature The Chemical Brothers, Duran Duran, Tame Impala, Underworld and Little Dragon.

4 // Oasis // Marrakesh, Morocco
Dates: September, 11-13, 2015
Details: If you are looking for a new festival experience, look no further than the Fellah Hotel in Marrakesh, where Oasis takes place. Against a backdrop of pools and desert landscapes, the festival brings the flavors of Morocco together in one space with local food vendors, henna tattoo artists and yoga to keep you occupied between a lineup of electronic music torchbearers. This year’s Oasis will feature DJ Harvey, Pardon My French, Blond:ish and also Axel Boman.

5 // Outlook // Pula, Croatia
Dates: September 2-6 2015
Details: Outlooks takes place in a 2000 year old Roman Amphitheater and in Fort Punta Christo. Surrounding by beaches, the festival brings together a lineup for varied musical palates: dubstep, reggae, house, techno or hip-hop. The line up for this year includes Jurassic 5, Kate Tempest, Loefah, Roni Size Reprazent and Wiley. For the aficionados of this kind of music, Outlook is an mandatory sonic feast.

6 // Festival No.6 // Town of Portmeirion, Wales
Dates: September 3-6, 2015
Details: In the center of the colorful and fantasy land of Town of Portmeirion, Festival No.6 takes place around among architecture modeled after the Mediterranean. Over three days, the fest brings together a wide range of music including folk, house, rock and roll, techno and dance. This year, the performers are Grace Jones, Belle & Sebastian and Metronomy. On top of all the music, there’s paddle boarding, a pool, and a Pirate Workshop just for kids.

7 // Noctural Wonderland 2015 // San Bernardino, CA
Dates: September 4-6, 2015
Details: One of the most massive electronic music festival around, Nocturnal Wonderland attracts EDM fans and artists from all over the world. The festival brings electro, house, techno or drum and bass acts across five stages. This year the festival celebrates its 20th anniversary, so the organizers pulled out all the stop to bring an insane lineup that includesDavid Guetta, Afrojack, Kiesza, or Alesso. Follow the rabbit and enter into a magical world of color.

8 // Pop Montreal // Montreal, Quebec
Dates: September 16-20, 2015
Details: The 14th edition of Pop Montreal International Music features emerging and celebrated artistic talents from around the world. It’s a good opportunity to discover an eclectic mix of genres including rock, indie, alternative, hip-hop and folk, through the music of artists like Coeur de Pirate, Built to Spill, Braids or Royal Canoe.

9 // The Labyrinth // Niigata Prefecture, Japan
Dates: September 19-21, 2015
Details: The Labyrinth is an exclusive electronic music festival held in the mountains of the Niigata Prefecture of Japan. Designed for the most devoted techno-lovers with an admittance of only 2500 , the party will feature EDM favorites like Peter Van Hoesen, Petar Dundov and The Monk.

10 // Lake of Stars // Mangochi, Malawi
Dates: September 25-27, 2015
Details: Lake of Stars is an international festival held on the golden sands of Lake Malawi. Over the course of three days, the magic of music meets the beauty of nature. Artists like Young Fathers, Danny Kalima, Ric Hassani, George Kalukusha and Gwamba will perform against a backdrop of a heavenly African landscape.