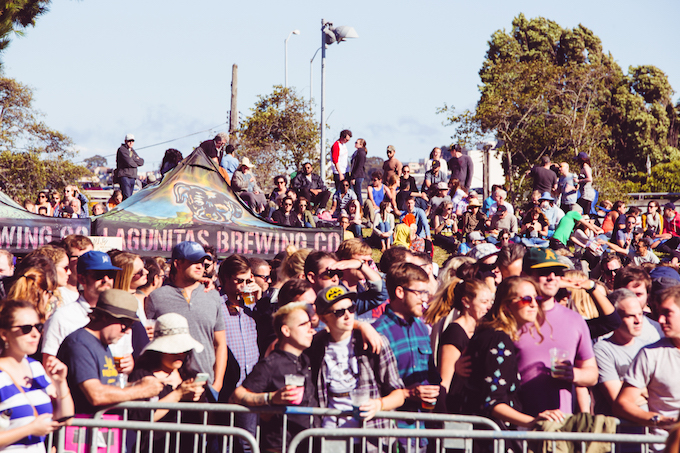 Despite Karl the Fog looming on the horizon, Potrero del Sol Park managed to remain under a sunny patch of sky for the sixth Phono del Sol Music & Food Festival. The fest, which is now in its sixth year thanks to the hard work of the folks over at The Bay Bridged and Tiny Telephone, saw both local and international bands take the stage during a day of songs, suds, and sun. Festival goers made their way through the gates, past a fountain filled with plastic pink flamingoes (the festival’s spirit animal) and on to the grassy fields in front of two different stages. Food trucks like Bacon Bacon flanked the park on the left, while skateboarders tore it up in the skatepark to the right of the Potrero Stage. 20-somethings sipped pints of Lagunitas brews and tasted a selection of Dark Horse wines while mingling in the packed beer garden. The vibe was chill, the summer breeze a pleasant change from the oppressive summer fog. And then, the first chords were strummed. 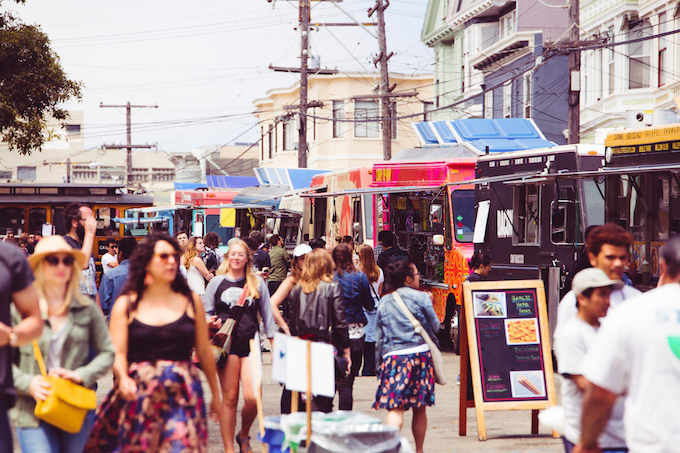 Dick Stusso kicked off the day with his darkly humorous tunes off his first album Nashville Dreams/Sings the Blues. Stusso, decked out in a floppy cowboy-esque hat and Western shirt, looked like a midnight cowboy who got lost in the summer sun. Boogie and twang combined to create a fun opener to a day packed with rad beats. 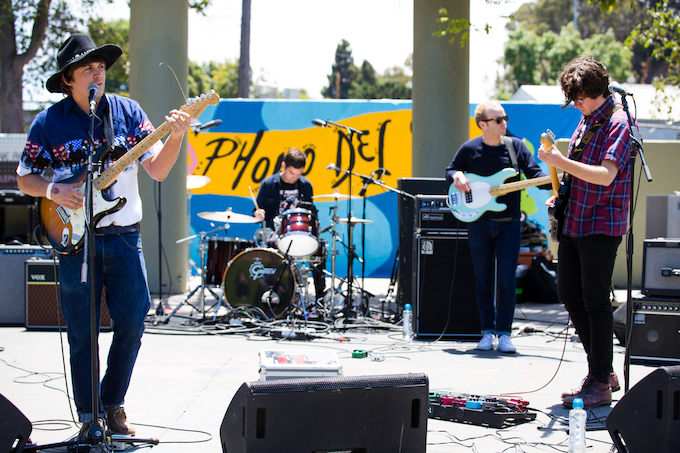 Hot Flash Heat Wave broke in the Mission Stage, where the band played in front of a massive Familia mural that made the intimate gathering seem even more homey. The garage-rock golden boys mixed some new songs into a sizzling lineup that paired perfectly with a cold beer. 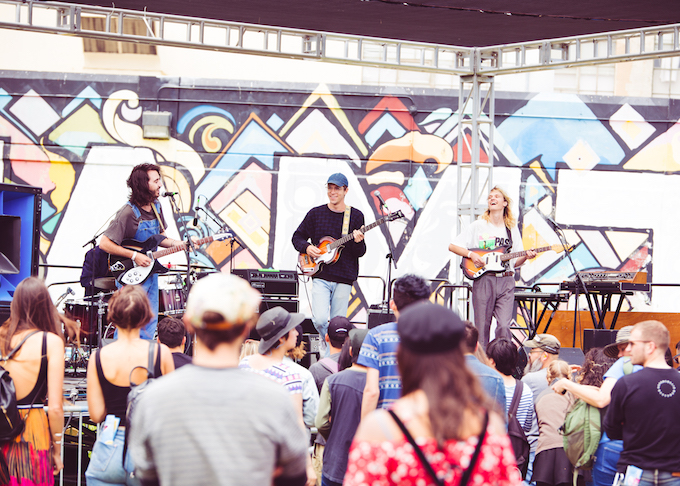 The darlings of SF were at it again, making listeners all over the park fall in love with The She’s beachy tunes and dreamy vibe. During the middle of the set, members Hannah and Sami busted out their own sweet version of Patsy Cline’s “Seven Lonely Days”, showing off their perfectly paired vocals while Eva switched guitars. It’s not hard to believe that these girls have been playing together since 7th grade — they played like a well-oiled machine while still keeping their set breezy and carefree. 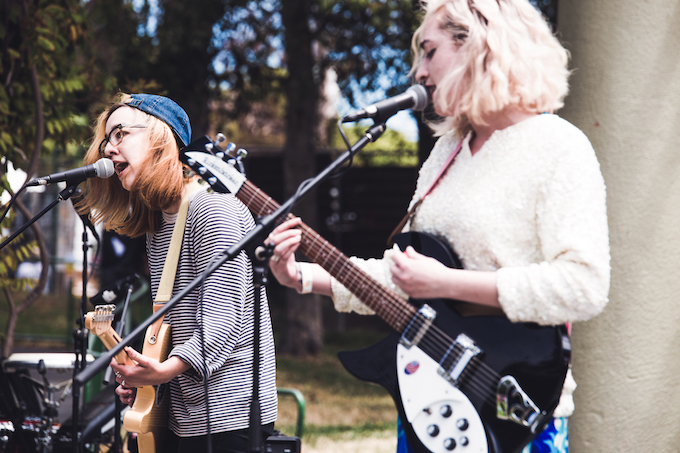 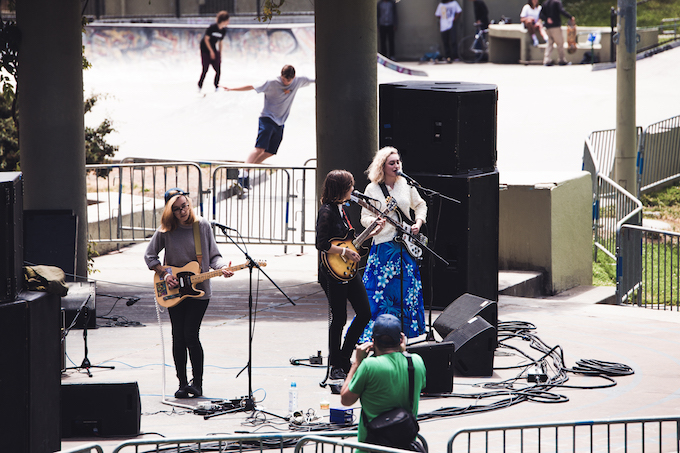 Composed of a seven-piece band based out of San Francisco, The Seshen was a crowd favorite of the day. The band boasts an eclectic sound that ranges in style from psychedelia to R&B. It’s obvious that its members love playing together and this joyful vibe is contagious. Lead singers Lalin St. Juste and Akasha Orr had fans clapping along, while the rest of the band busted out funky, danceable tunes. 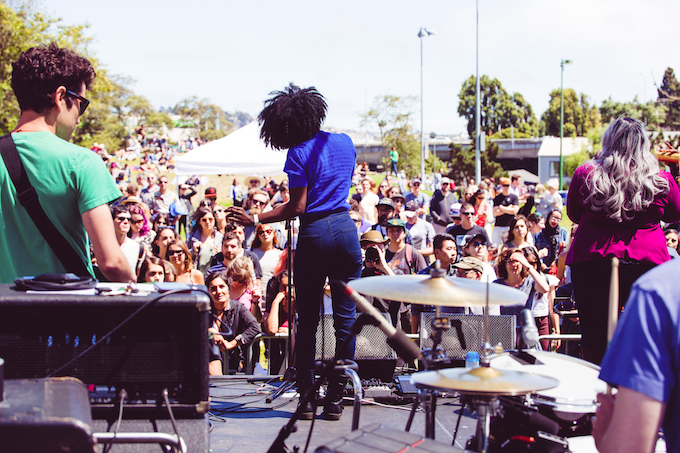 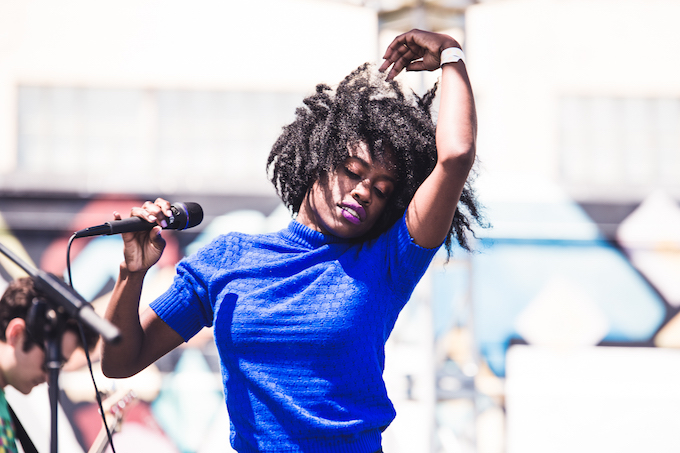 In a world of such confusion and rage, it’s refreshing to hear a rapper talk about finding the higher ground or, as Adam Vida calls it, becoming Thurlian. The Bay Area-based rapper urged the crowd to Think, Hustle, Understand, and Really Live (or THURL) and in that way join him in his efforts to become Thurlian. Of course, Vida’s set, which featured DJ Habitat, was not without its party anthems — the rapper has an uncanny ability to wax philosophical one moment and get everyone dancing the next. 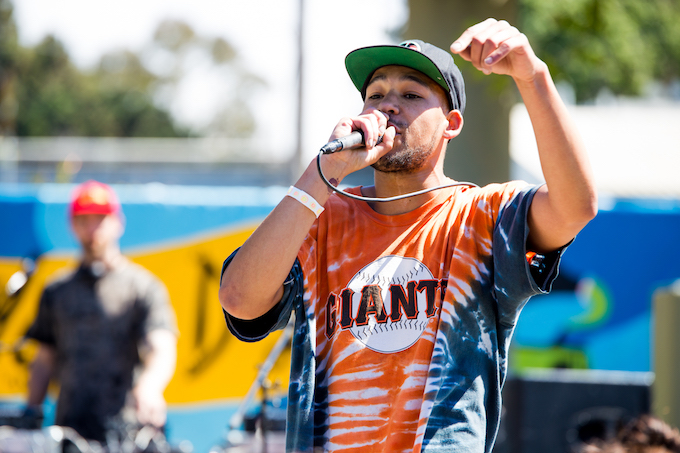 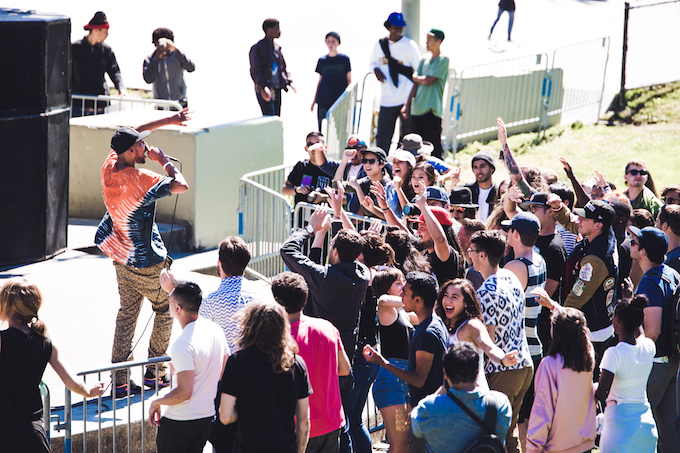 Nordic songstress Monica Birkenes, aka Mr Little Jeans, took over the Mission Stage in a burst of smiles and shoutouts. The lively singer-songwriter released her debut album Pocketknife in 2014 and has been met with a good dose of critical acclaim. Birkenes easily swept the crowd under her spell and had everyone swaying like tall grass in the Nordic countryside. 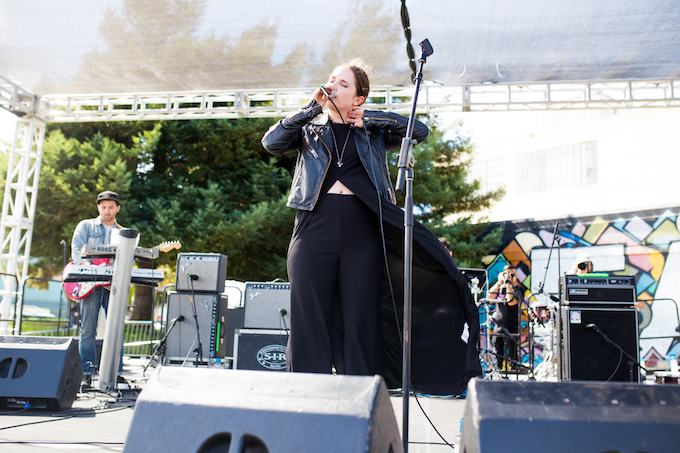 Born Ruffians may be from Canada, but they have certainly found a second home here in the Bay Area. The indie rock band has accumulated a devout following in SF, many of whom turned out for the band’s set on the Potrero Stage. Rocking a sleek pair of sunglasses, lead singer Luke Lalonde came at the set with his characteristic energy and Elvis-like dance moves. The crowd chanted along with bassist Mitch Derosier during “I Need a Life” and was treated to set filled with the band’s biggest hits. 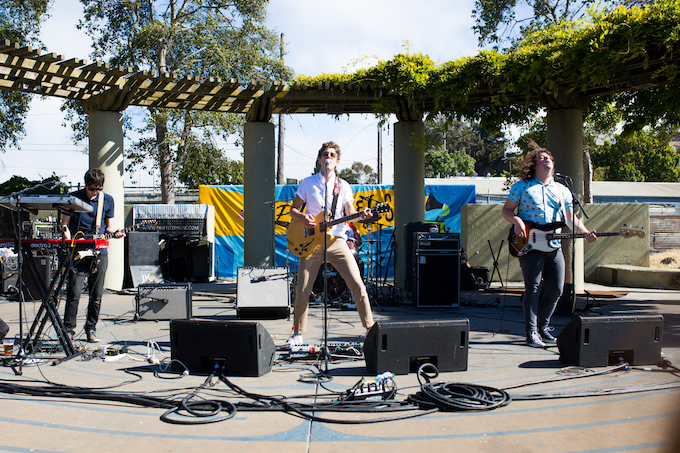 After having to cancel their appearance at Outside Lands last year, Alvvays finally made it to an SF-based fest, and boy are we glad they did. The Toronto-based indie pop group launched into a set filled with their romantic “jangle pop” tunes much to the excitement of the fans that had filled the lawn in front of the Mission Stage. Lead singer Molly Rankin joked with the crowd in between singing songs with that old world, Celtic-esque voice of hers. The cheers that started up during the first chords of “Marry Me, Archie” may have been some of the loudest of the day. 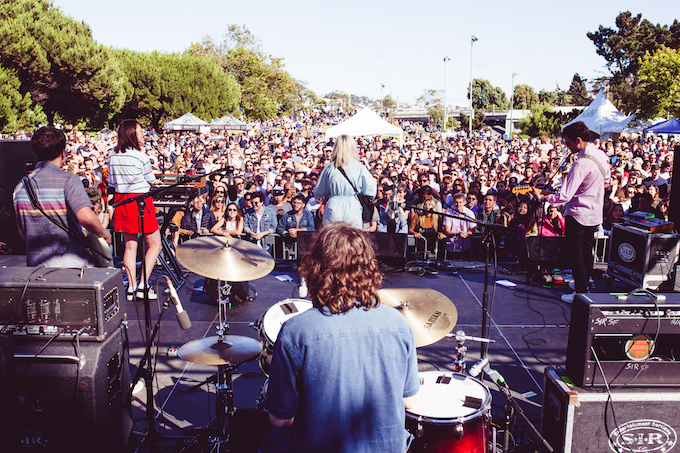 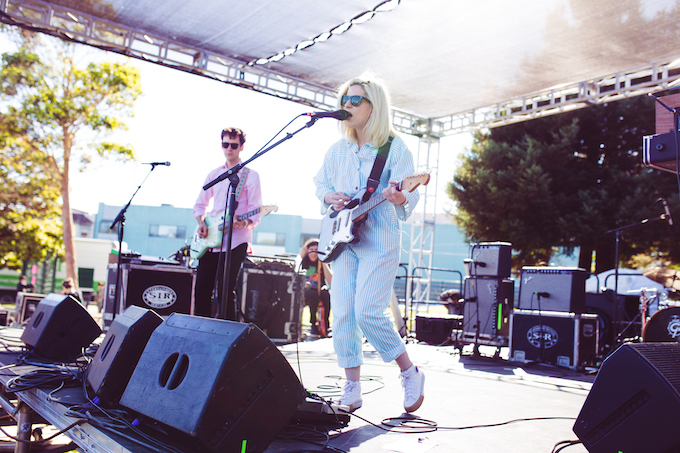 With the evening wind whipping lead singer Caroline Polachek’s shirt sleeves into a graceful frenzy, Chairlift’s set took on the surreal characteristics of a dream. After a false start thanks to a loss of power, the band recovered and easily moved into a set filled with angelic vocals and energetic riffs. Polachek’s voice, and shining silver pants, were captivating and quickly got the crowd swaying to her hypnotic sound. The band played songs from all three of their albums, including hits like the sweet “Bruises” and eternally catchy “Cha-Ching”. 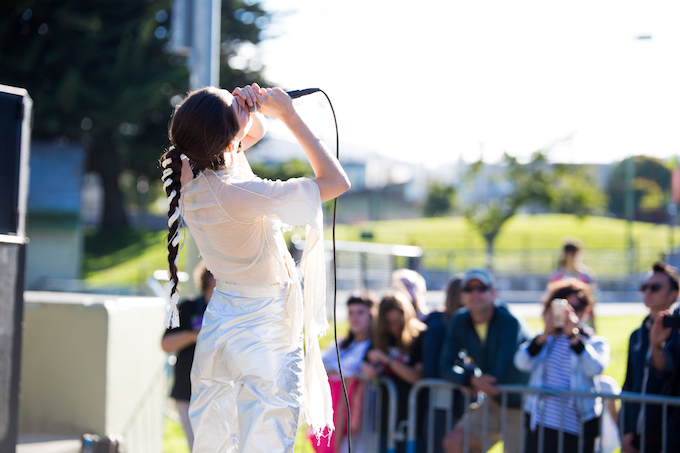 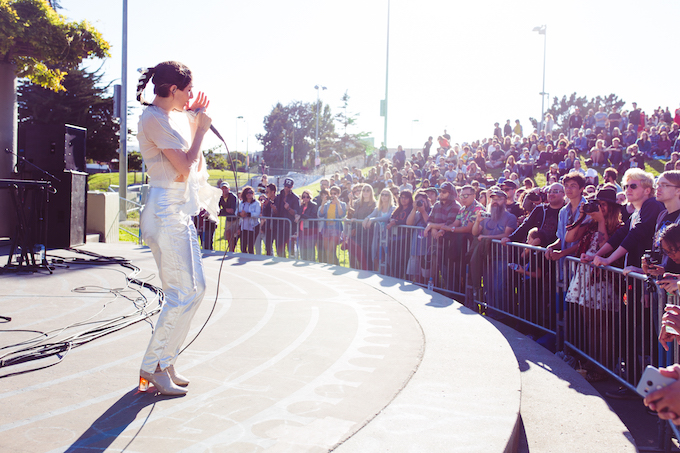 Follow us on Twitter and like us on Facebook to give us a shout and stay on top of exciting events from around the world by downloading the eventseeker app for iPhone, Windows, or Android.