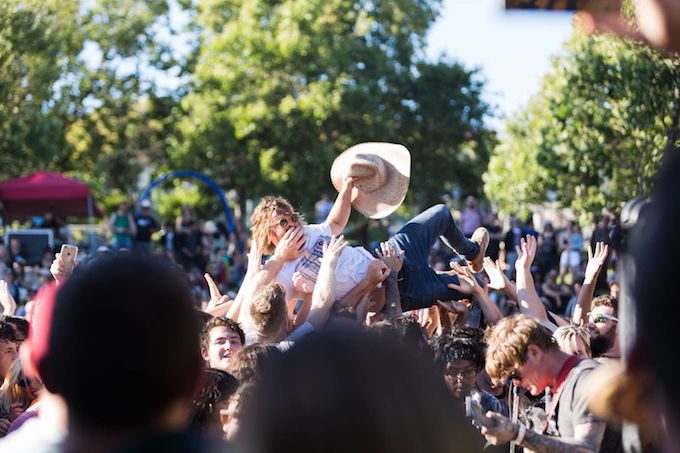 Crowds flooded into compact Potrero del Sol Park for the seventh incarnation of San Francisco’s beloved Phono del Sol Music & Food Festival on Saturday June 17th. The day featured clear blue skies and soaring temperatures that only served to heighten fest-goers’ enthusiasm. The lineup was packed with stellar performances by some of the Bay’s hottest acts, and headliner Oh Sees (formerly Thee Oh Sees) had fans dancing like mad right until the very end. While pink flamingo decorations looked on over all corners of the park, guys and gals decked out in their summer finest sipped Lagunitas brews and chowed down on the offerings of food trucks like The Waffle Roost and Curry Up Now. 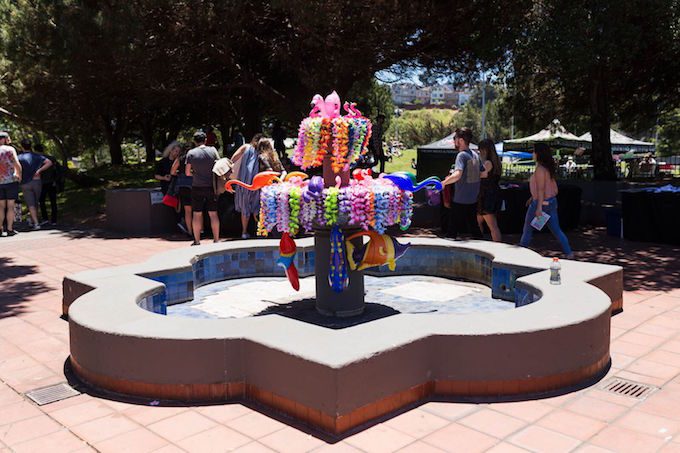 Tino Drima strummed the first chords of the day, and what dreamy chords they were. The San Francisco-based band features an all-star crew populated by members of O, Spooky Mansion, and French Cassettes, and released their EP, Smoking, back in 2016. Lead singer Gregory DiMartino’s playful movements paired with the band’s weird and wonderful sounds set the mood for a groovy afternoon in the sun. 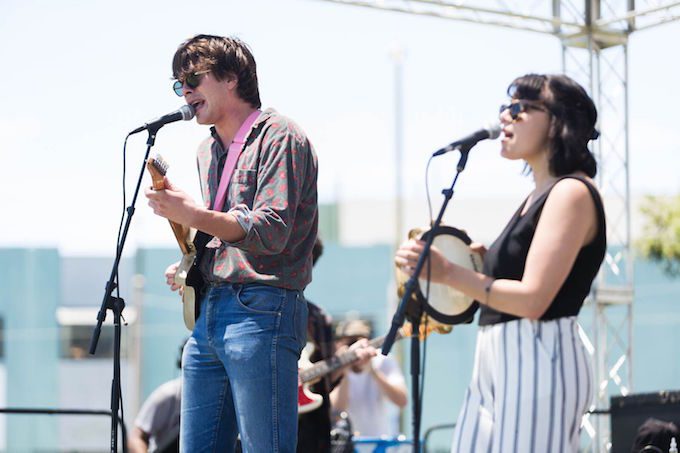 Madeline Kenny kicked things off on the Potrero Stage while rocking a pair of spunky red sunglasses. The Oakland-based enchantress was backed by a band packed with musical genius and featured members of Bells Atlas — who took the stage later in the day — Astronauts, etc., and Perhapsy. Kenney’s warbling vocals paired perfectly with heavy-hitting rhythms. 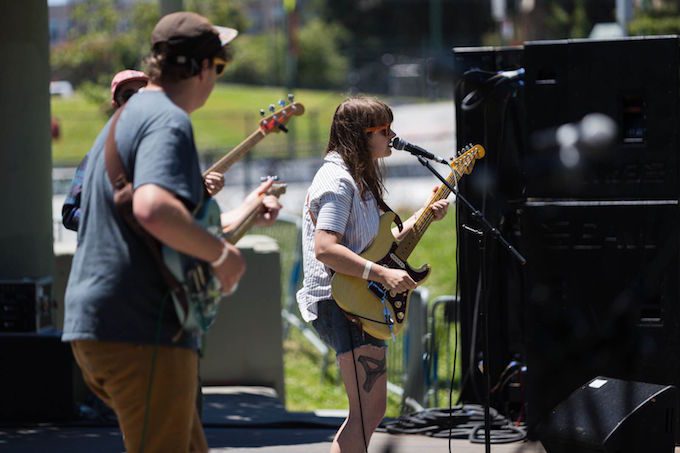 Rayana Jay and her backing band had the crowd clapping and dancing to soul songs and funky R&B tunes off Jay’s debut album Sorry About Last Night. The floral-clad singer weaved a spell with her silky smooth vocals and ended the set with her groovin’ new song “Magic”, which will be out soon. 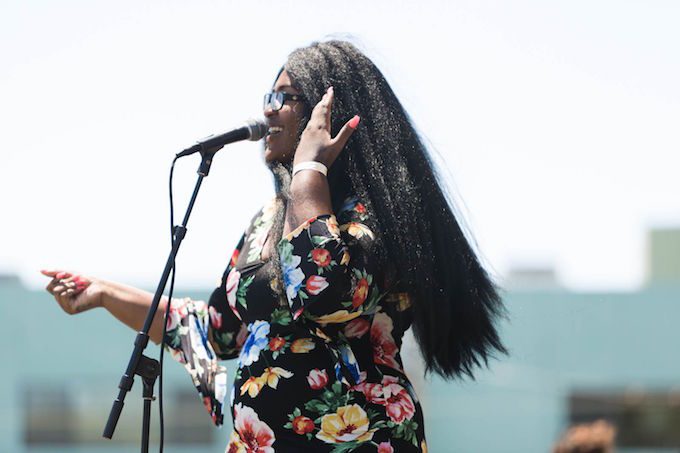 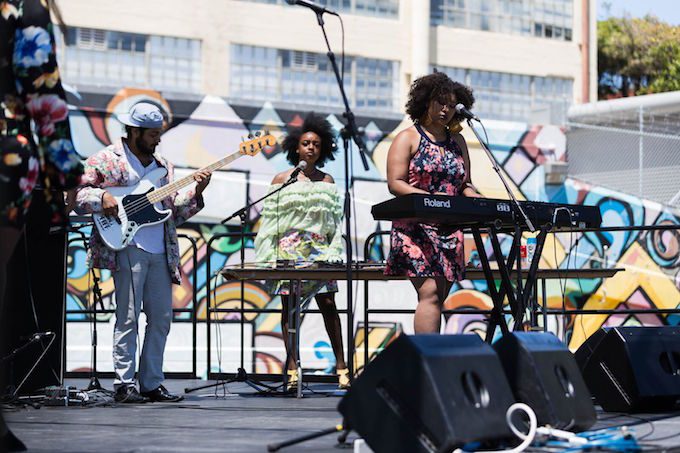 Never Young gave the crowd a set that never got old. The band played their set with high energy and an authoritative presence that drew the crowds in and held them until the last chord. The group’s punk-pop sound was both feverish and bright, with driving refrains and plenty of zeal. 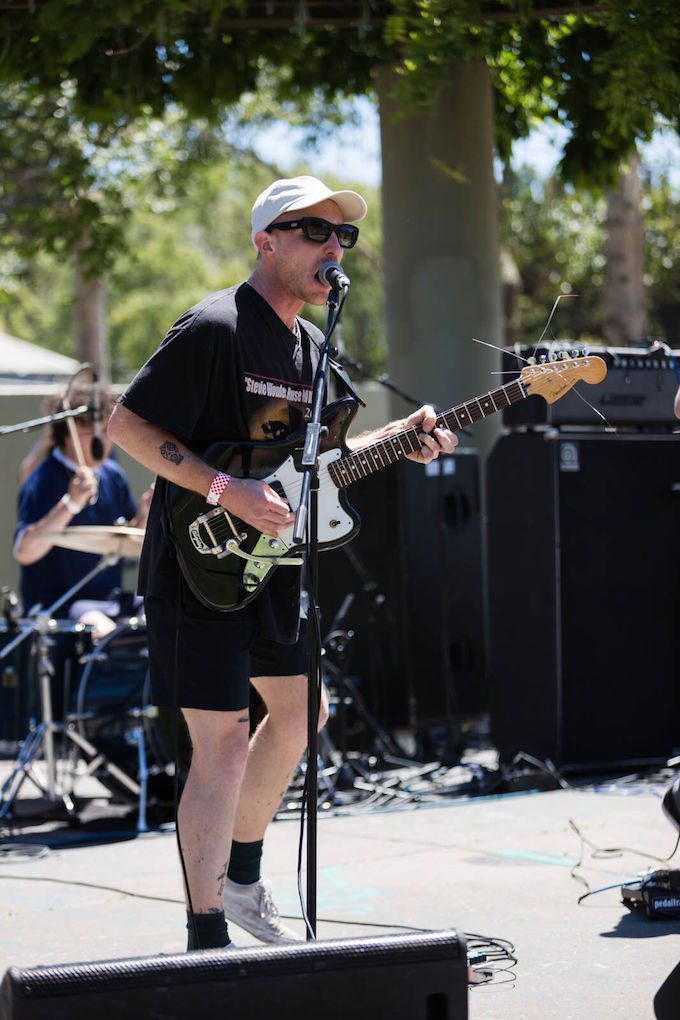 Bells Atlas took the stage for their first time at Phono del Sol in a storm of heavenly vocals and far-out beats. The Oakland-based band’s electrifying songs had the fest-goers swaying, while lead singer Sandra Lawson-Ndu happily chatted with the crowd between songs. The band debuted a new song which is as of yet untitled which featured drums like a racing heart and tinkling, dreamy bells. 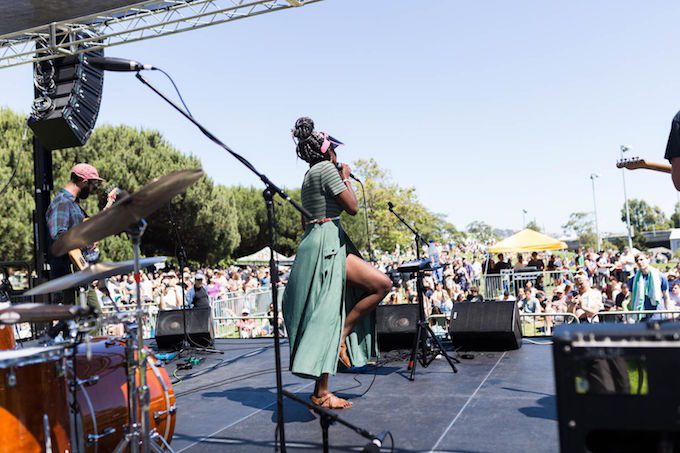 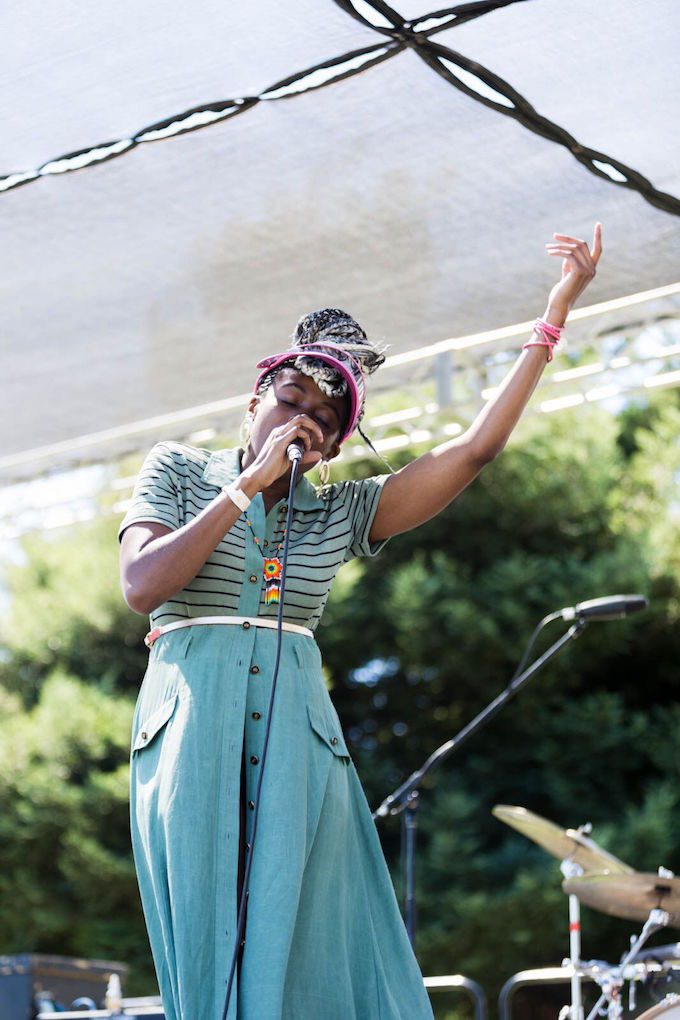 Bay Area rapper and visual artist DUCKWRTH had the Potrero Stage crowd getting down under the summer sun. The energetic performer paid homage to South Central, where he grew up, busted out freeze-frame moves, and invited local rapper Anthony Dragons to join him for his last song. Boasting one of the most energetic sets of the entire day, many had DUCKWRTH on their minds long after he’d left the stage. 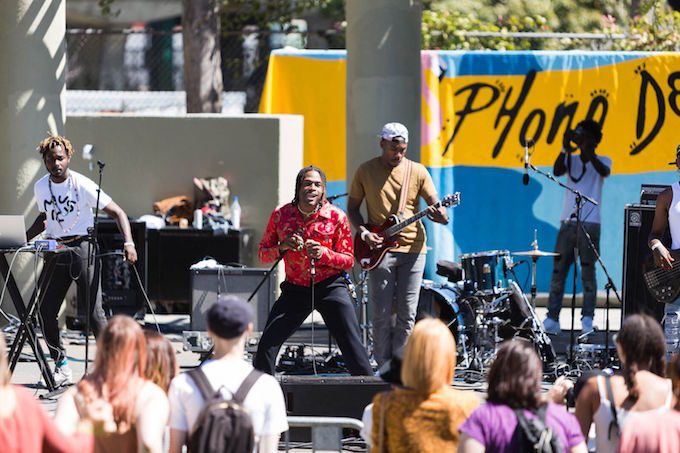 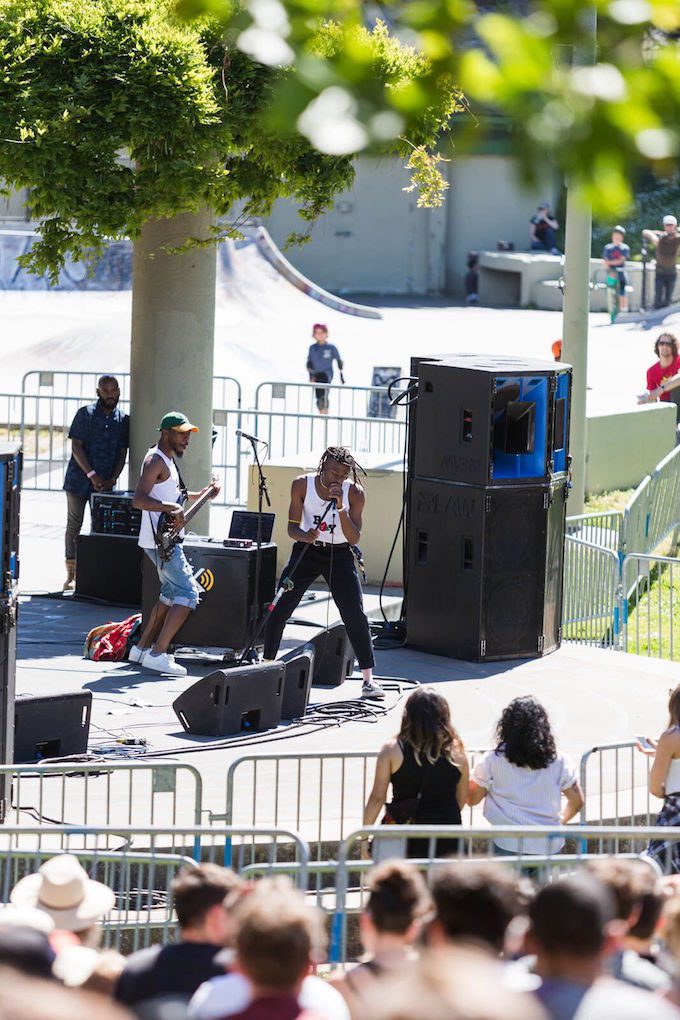 A few songs into his set, acclaimed SF-based musician Sean Hayes looked out at the crowd and commented, “Looks like we needed to make the beer garden a little bigger”. He was not wrong — fans of the soul-folk singer filled the garden to the brim to hear Hayes play both old and new songs, including songs off of his eighth album Low Light. 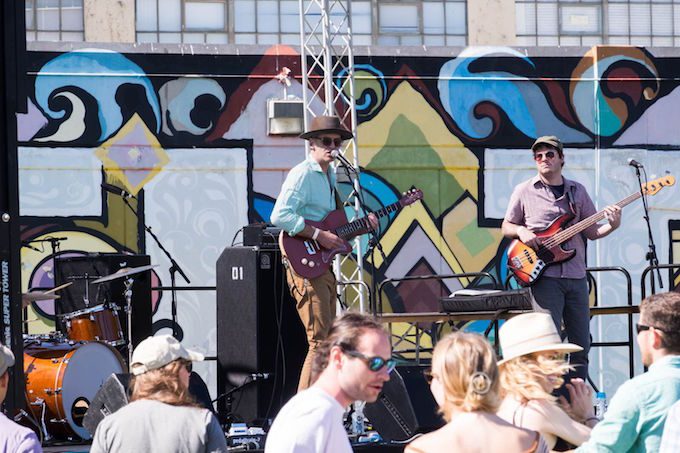 With a roller coaster set of slow jams melding into hard hitting rock anthems, Melina Duterte once again proved her might. Jay Som is the amalgamation of Duterte’s talents; she writes, records, produces and plays almost everything herself. A haze of smoke drifted up from the crowd as they listened to Jay Som’s astral sound. 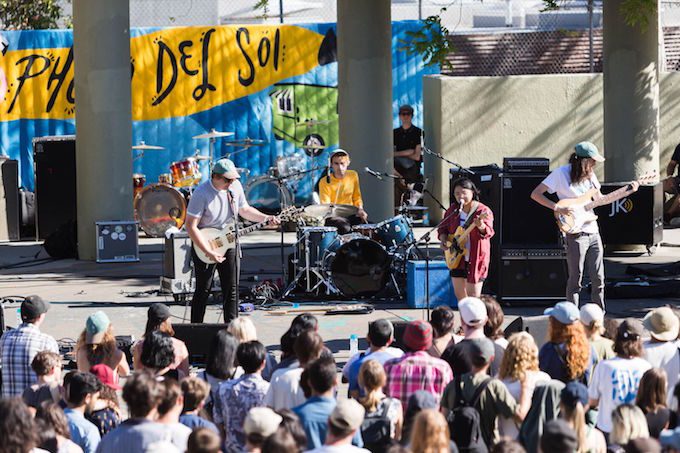 The Coathangers closed out the Mission Stage with a sizzling set in front of a packed and cheering crowd. With a ‘Happy Birthday’ balloon floating on stage to celebrate bass player Meredith Franco, the red-clad trio dove into their garage punk set with gusto. 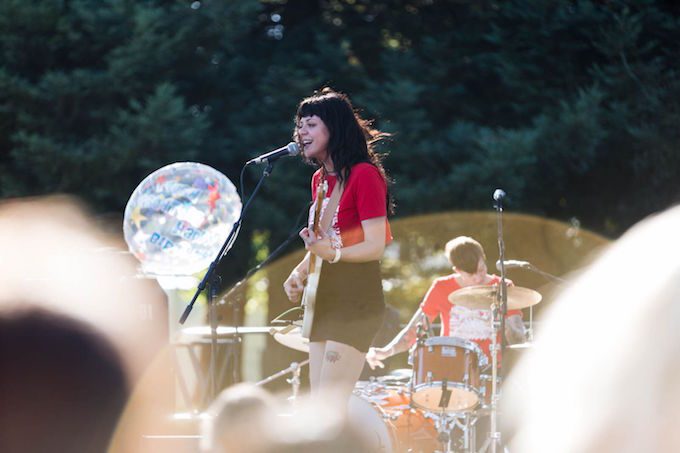 One week before Phono, Oh Sees frontman John Dwyer dropped the ‘Thee’ from the name, but not much else has changed about this rollicking group. Soon after the band took the stage, Dwyer invited the vibrating crowd to jump over the fence barrier and mosh right on stage. From there, electric chaos ensued, with crowd surfers making their way from one side of Potrero Stage to the other and Dwyer swallowing his mic as usual. The crowd could not get enough. Of the writhing throng in front of him, all Dwyer had to say was, “That’s just San Francisco!” 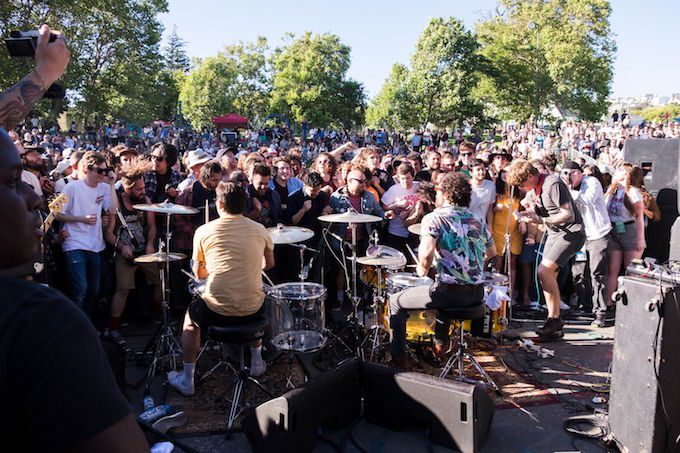 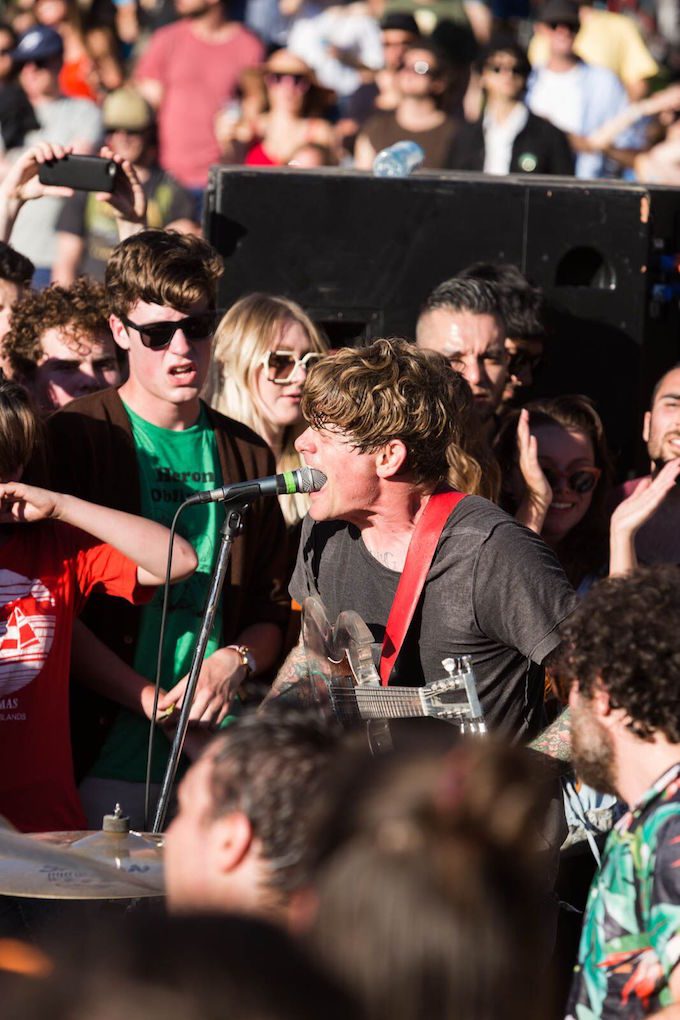