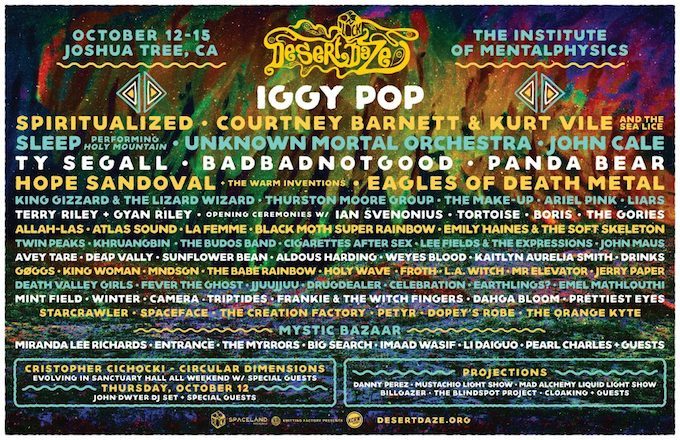 Desert Daze is returning to The Institute of Mentalphysics in Joshua Tree on October 12-15, and if you’ve seen the lineup you know it’s a mandatory event for any fan of loud rock and roll. In a few short weeks, headliners like Courtney Barnett, Kurt Vile, Spiritualized, Unknown Mortal Orchestra, Panda Bear, Hope Sandoval, Eagles of Death Metal, Ty Segall and of course, the legend himself, Mr. Iggy Pop will band together for four days of music and camping. We love seeing these big names on top of the bill, but festivals like Desert Daze are much more than the sum of their headliners. Beyond these heavy hitters, here are the top 5 undercard acts you should check out at Desert Daze 2017.

Frankie & the Witch Fingers makes psychedelic music that you can dance to. Since leaving Bloomington, Indiana and relocating to LA, the band has built a reputation for their electric live performances. So while you should definitely pick up a copy of their upcoming LP Brain Telephone, officially out September 15 on Permanent Records, you’re going to need to see them in person to get the full effect. In the meantime, enjoy this cut off of their last record, 2016’s Heavy Roller.

Death Valley Girls describes itself as a cosmic scar on the hills of Echo Park. They’re not wrong. This band runs on chugging rhythms, brazen vocals, and something otherworldly that evokes a feminist utopia where girl gangs rule.

The aptly named LA Witch is a rock band that isn’t afraid to get dark. While they don’t practice witchcraft, the trio wanders into the gothic quarter of the psychedelic spectrum where desert rock meets space rock. On top of that, they’ve got some of the most primitive vocals and guitar tone in modern rock and roll right now. Hit play on “Untitled,” the latest single off of their forthcoming self-titled debut LP, and hear it for yourself.

Spaceface is a band from Memphis that braids glittery hooks and celestial riffs into unapologetically sunny soundscapes. This may seem trite in a musical landscape that idolizes the 1960s, but the sheer quality of instrumentation and arrangement makes Spaceface stand out legions beyond the rest. Led by Jake Ingalls, guitarist and keyboardist of The Flaming Lips, the group is well-seasoned in recording and performing. Check out “Cowboy Lighting” off of their 2017 album Sun Kids and you’ll see what we mean.

Deap Vally is a duo from LA, but make no mistake: They have the biggest sound on this list. Drums and guitar are all these two women need to channel their sharp blues sensibility and affinity for punk into one massive sonic aesthetic.

Check out the rest of the Desert Daze bill in their official lineup video below and get your tickets now. See you in the desert!