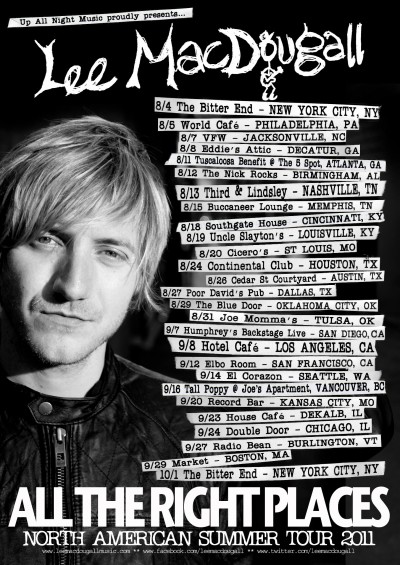 This week, we published an interview with Lee MacDougall on the blog. In conjunction with the post, eventseekr is also giving away a total of five pairs of tickets to see Lee MacDougall perform live at the Cedar Street Courtyard in Austin, Texas, August 26, 2011. To win a pair of tickets, all you have to do is tell us why you want to go by making a post on the eventseekr Facebook page (http://www.facebook.com/eventseekr) or by replying to us (@eventseekr) on Twitter with the hashtag #MACeventseekr (http://www.twitter.com/eventseekr). The contest begins Thursday, August 4th, 2011 at 12pm PST, and runs through Wednesday, August 24th, 2011 until 12pm PST. The winners of the contest for the five pairs of tickets will be notified on August 24th by 3pm PST.

The show itself is a 21+ event, so contest participants must be of the age of 21 or older.

This online competition is promoted by eventseekr, which is powered by Wcities. Wcities retains the right to alter the Competition rules with timely notification at any point of the Competition. Changes to rules will go into effect immediately. Wcities

Follow us on Twitter and like us on Facebook to give us a shout. You can also stay on top of exciting events from around the world by downloading the eventseeker app for iPhone, Android or Windows