The marathon that is a music festival has many twists and turns, and the foremost lesson I’ve learned from attending music festivals like this weekend’s Lollapalooza, especially this Lollapalooza, is learning how to adjust on the fly. At large scale events like this, there are a multitude of elements that just aren’t within your control, and you just have to deal with them as they come. Namely, I’m referring to the weather. Oh, yeah, the weather. 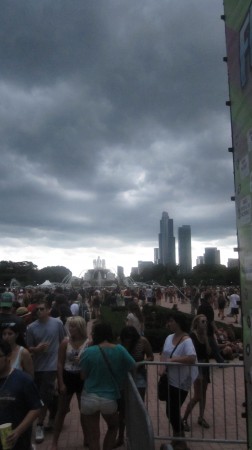 The clouds just before the first big rainstorm. Photo by Joey Pangilinan.

My friends and I arrived at the park on Sunday, after spending lunch at Pizano’s Pizza, to what looked like a nice calm final day of the festival. Then of course, came the evening. I went solo to check out Jackmaster at Perry’s stage, and then wandered to the other side of the festival until I happened upon the BMI stage, and watched Boy & Bear play the final half of their set. I’m not familiar with Boy & Bear, but one of the beauties of a festival is discovering new music. After having a good time during their set, I will likely give their material a proper listening to.

The original plan was to meet my friend Ben to watch Busy P back at Perry’s after my aimless wandering around, and I did. However, not before a huge rainstorm bathed practically every inch of the park. Leaving the BMI stage right when the thunderstorm started, all I could think was “really?”

I had to run two city blocks from Columbus & Jackson to Columbus & Balbo in a thunderstorm. It was a surreal experience, and I felt like I was in some sort of post-apocalyptic based movie. Drenched and half-covered in mud, I finally found Ben twenty minutes into Busy P’s set. The highlights of his set including him playing Hey Today’s remix of Tiga’s “You Gonna Want Me” and SebastiAn’s remix of “Killing in the Name.” 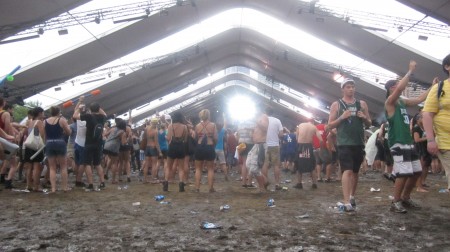 The mud during Busy P’s set at Perry’s. Photo by Joey Pangilinan.

Another added highlight was watching everyone dance in the mud. Some were even slip and sliding in it, and I just decided that my shoes were past the point of salvageable, so there I was dancing in the wet, wet mud. Ben and I regrouped with the rest of our crew and caught a sizable portion of Modeselektor so that all of us could dance in the mud at Perry’s.

Having a great time, and feeling good about getting ever so slightly drier, we made our way back up to the Bud Light stage to set up for Deadmau5’s set. About halfway on our way there, we were hit with another rainstorm. Thankfully, we found a little shelter in of all places, the porter-potties. At least I did. 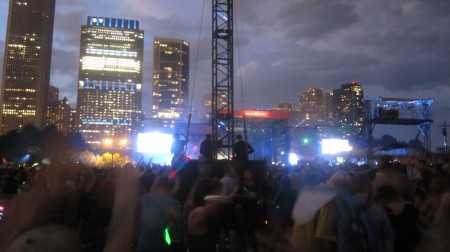 After getting as close as we could to some speakers on the left side of the stage, my friends and I found a cement walkway to dance on. An hour and a half later, after Deadmau5 incited the crowd into dancing up a storm and into exhaustion with tracks that included “Ghosts and Stuff,” “I Remember…” and a remix toDaft Punk’s “Harder, Better, Faster, Stronger.” Sofi even made an appearance to perform vocals on the tracks “Sofi Needs and Ladder,” and “One Trick Pony.” I haven’t been that big a fan of Deadmau5 previously, but I would be lying if I said I didn’t have a good time dancing in the muddy cement with my muddy shoes drenched in rain water.

The day didn’t go exactly as planned, but it was a very serendipitous day. The word “epic” is thrown around so leisurely these days, and I refrain from using it a whole lot, but day three of Lollapalooza 2011 was pretty epic.