Even though fall is quickly descending on the Bay Area, Canada’s Junior Boys will definitely help you celebrate the last days of Indian summer. You’ll be blown away by them regardless of whether or not you’ve heard of them. A mix of indie electrical music that goes from garage to minimal techno, Junior Boys has drawn inspiration from a various range of genres to create their own particular sound. They played a free show in their home city of Hamilton, Ontario to kick off a tour that will promote their latest album It’s All True. Luckily for us, they will be making a stop in San Francisco at Mezzanine, a busy music venue that hosts bands and DJs alike, on September 23rd. On the same night, Mezzanine will also be hosting DJ Aaron Axelson and Young Galaxy, an indie band on the Paper Bag Records label that plays a kind of dreamy pop music. In addition, Popscene announced yesterday (Sept. 19) that Two Door Cinema Club will be performing a guest DJ set at Mezzanine that same night after they wrap up their own headlining gig at the Warfield just down the street. 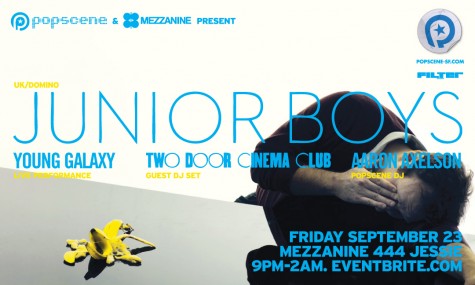 Junior Boys debuted in 1999 as a duo with Jeremy Greenspan and Johnny Dark. After working on a demo, Dark left the group and Greenspan continued the story with his engineer Matt Didemuse.

After releasing the Birthday/Last Exit EP, their first official release, in October 2003, the band dropped a full length album in February 2004 with Last Exit. Their most famous song, In the Morning, is from their second album, So This Is Goodbye, released in 2006. The track is sexy and smooth, with a sharp and deep bass. The album was on the shortlist for the 2007 Polaris Music Prize. Also in 2007, they initiated a North American Tour along with several dates at a few European festivals. Their third album, Begone Dull Care, came out in 2009.

Through the use of social media, the band announced the release of their current album, It’s All True, in June of this year. They are still growing as a band and developing their own peculiar sound, but you will find a seamless transition from Last Exit all the way to It’s All True. The music is shocking and pretty, and seven years after Last Exit, the band is still as unflappable as ever.