Early fall equals party time in San Francisco: we have three massive music festivals coming – first LovEvolution, then Hardly Strictly Bluegrass, and finally (as a hip cherry on the proverbial cupcake) Treasure Island. The rest of the world doesn’t sit and envy though — they’ve got their own. Here are three fests in Europe and the US that exemplify what “a badass lineup” means.

If you’re hungry not only for new sounds, but for an intriguing curatorial concept to hold them together, you should head to Unsound. Last year’s topic was “horror,” and this fall the artists will be grouped under the banner of “future shock.” The theme explores the phenomenon of “information overload” and how people will need to brace up for what the future holds — many a participant’s music might be best described as dystopian.

Who I would see: With his partner The Spaceape, London-based producer and Hyperdub label founder Kode9 made one of my absolute favorite albums of all time: 2006’s Memories of the Future. This year’s Black Sun is somewhere up there, too. Kode9 is hailed as an originator of the dubstep genre, but he offers something more complex and sophisticated than the lumpen “brostep” that seemingly rules the world today. That doesn’t signify sexless intellectualism though: Kode9’s music always stays markedly physical, with Memories of the Future’s hair-raising bass pressure replaced on Black Sun by sensual, funky beats and synth sounds so crisp you’ll want to wear them for your wedding. All of it is coupled with the narrative about the Earth after a radiation disaster. At Unsound, Kode9 (sans Spaceape) will be paying a live homage to the 1960s sci-fi movie La Jetée, which tells the story of a time traveler in a world ravaged by nuclear war. 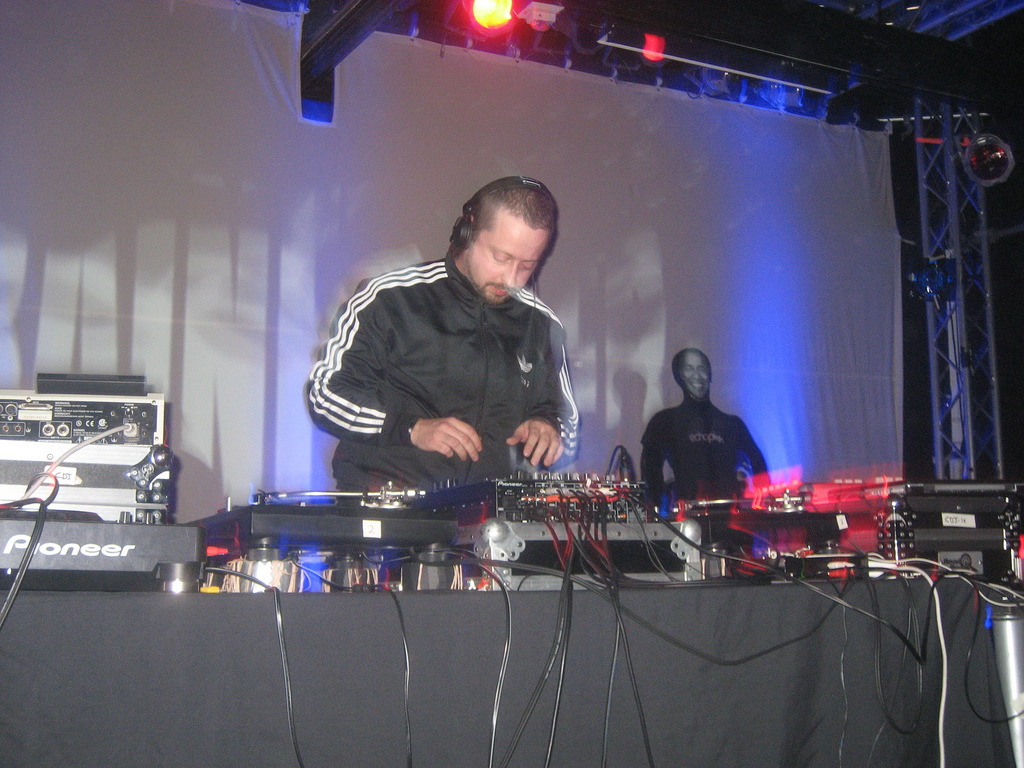 Extras: Unsound will also feature a wide array of producers and musicians whose releases all played a part in making 2011 interesting – including, but not limited to Morphosis, 2562, Andy Stott, HTRK, Kangding Ray, Sun Araw, and William Bennett’s Cut Hands.

In a week Seattle will parrrrrty like the Londoners party in forward-thinking nightclubs like Fabric. We San Franciscans will get some trickle-down in the form of performances by such Decibel participants as Amon Tobin (with his “ISAM” audiovisual extravaganza), Machinedrum, and Zomby. Well, that’s if Zomby shows up to his gig. He sometimes doesn’t.

Who I would see: I don’t know what’s wrong with me, but I simply cannot stop listening to Canadian producer Egyptrixx’s Bible Eyes album. It is sleek machine music which manages to be icy cold and groovy at the same time. Add to that a flirtation with Gothic sensibilities on tracks like “Fuji Cub” (with sepulchral vocals courtesy of a member of the band Trust) and the slow, cavernous “Start from the Beginning.” With this record, Egyptrixx definitely aims further than the dance floor.

Egyptrixx – Start from the Beginning from A. N. Fischer on Vimeo.

Extras: Bible Eyes was the first LP released by the label Night Slugs, which will have a strong presence at Decibel – think sets by Girl Unit (author of last year’s “Wut-wut-wut…” anthem), Bok Bok, and Kingdom. There will also be inevitable appearances by big-name electronic acts like Moby, Ladytron, and Bonobo, as well as more off-center producers such as Martyn, Matthewdavid, Kyle Hall and Ital Tek.

I’ll Be Your Mirror is a sister event to All Tomorrow’s Parties, a series of corporate sponsorship-free festivals curated by prominent musicians and other cultural troublemakers. This year the project is helmed by seminal ’90s triphop band Portishead, which got out of the coffin a few years ago to record and release a third album (simply called, well, Third) with remarkable success. Now, they’re showing America what music they like.

Who I would see. Swans! I was one of those fans who never imagined that they would ever see those cult noise rockers back together — I couldn’t even boast that I saw them before they broke up, because when they shot down the business in 1997, I was not even in my teens. But here I was in March 2011 in one of San Francisco’s best venues, the Grand Regency Ballroom, having my guts ferociously gnawed at by those mighty guitar chords and enjoying the view of other fans smiling blissfully. The only thing that could make this better would be to have Swans reunite with their former vocalist Jarboe, a tough lady who can turn from an angel into a demon and back in no time — but that probably will not happen. Anyway, after their show you feel most acutely the fact that there’s Swans, and then there’s everyone else.

Extras: Portishead have invited a bunch of major players in the field of alternative rock, including Oneida, Earth, Mogwai, Deerhoof, The Horrors, Battles, and Thee Silver Mt. Zion Memorial Orchestra. Also, Public Enemy will be performing their classic album Fear of a Black Planet.

Heading to any of these festivals? Give us a shot, and tell us! Let us know what you think! Follow us on Twitter and like us on Facebook to give us a shout. You can also stay on top of exciting events from around the world by downloading the eventseeker app for iPhone, Android or Windows.