By BRIAN THOMAS
Maybe you read my preview post on eventseekr about the new JFJO album, The Race Riot Suite, or maybe you didn’t. Well, as promised, I have an actual show review for their new tour in support of the new album. Since I have been a huge fan of the band for many years now, I’m a little biased. I have loved every show that I have ever seen, and never really get tired of going to more. It is amazing jazz; some of the best you will hear anywhere, so it is hard to tire of that sort of thing. I knew that the show at the Boom Boom Room on October 1st was going to be amazing. It really was never a question that entered my mind. 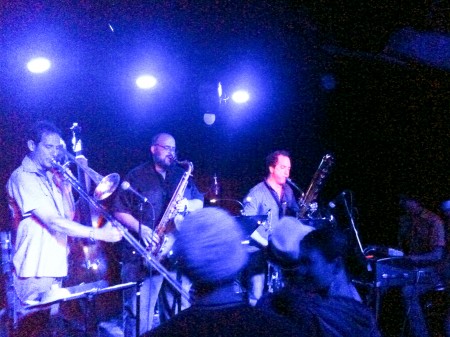 Since I know Brian Haas, original founder of JFJO, I showed up a bit early to just say “hi” before the show started and found the band in the middle of sound check, which sounded amazing. I have never heard the band perform with horns before, and seeing them practice I knew I was in for a treat. All the hardcore JFJO fans out there know that back when the band formed, horns were a permanent part of the band. Through the years, however, the total number of staple members has decreased. Now, JFJO is normally just Brian Haas on piano, Josh Raymer on drums, Chris Combs on lap steel, and Jeff Harshbarger on double bass, and they have been a quartet for as long as I can remember seeing them, though the members have changed during that time. This was going to be my first chance to see a more elaborate performance, and I was getting excited.

I headed out to go get some dinner and hang with my wife and sister-in-law, who lives super close to the Boom Boom Room. I am from Tulsa, Oklahoma, just like the band, and when my wife, sister-in-law and I rolled back to the bar around 10:30 or so, we immediately ran into some other Oklahomans. A night with familiar faces is always a welcome treat. We got to catch some amazing songs by the opening act, Scott Amendola and Will Blades. With just an organ and drums, they really produced some amazing music, and honestly I would have liked to have shown up earlier to catch more tracks. They play flawlessly together, and put out an amazing mix of funk and jazz that really was making people groove. It really reminded me of some of Herbie Hancock’s music from the 1970s, which means that yes, it was awesome.

Jacob Fred didn’t hit the stage until around midnight, but as they were playing until 3 AM, it was really no big deal. As soon as JFJO started, the energy in the room hit a high. The crowd pushed closer to the stage and immediately started moving. Just like always, the band was amazing, and seemed to be mentally connected in ways that I don’t really understand. Every transition was hit perfectly and the band seemed to move with a mind of its own through the set. This ability seems so natural with JFJO, that you somehow forget that they probably practice an obscene amount to achieve such perfection. Their music isn’t really a sit around and chat with others type of jazz, but more a super high energy jam jazz that doesn’t really allow you to sit quietly. I love this kind of thing, and found myself nostalgic for the days when I used to live in Oklahoma, and got to see them multiple times a year. During the set break, I got to hang with the band, enjoying an amazing San Francisco evening and some fresh air. They played a ton of songs off the new album, but also some older stuff and covers, including a very crazy version of The Beatles’ “Happiness is a Warm Gun.” I wish that they would have played two dates in San Francisco, and am now regretting not making the trek up to The Hop Monk in Sebastopol for the previous evening’s show.

This was definitely one of the better shows I have seen this year, so if they are coming to your city, do yourself a favor and make sure you go. I guarantee that you won’t be disappointed. Check out eventseekr for tour dates, and if you live in New York City you have multiple chances to see them play at the Jazz Standard, so you have no excuse.

Love Jazz as much as Brian? Let us know what you think! Follow us on Twitter and like us on Facebook to give us a shout. You can also stay on top of exciting events from around the world by downloading the eventseeker app for iPhone, Android or Windows.