By ADAM SAWYER
Lovers of hoppy, wheaty and even chocolatey yumminess all raised their pinkies at Fort Mason in San Francisco this past Saturday for the Third Annual Bay Area Brew Fest. Besides giving you a rundown of my favorite brews of the event, I’ve also got a bunch of tips you might find useful at your next beer tasting event. Although, before I go on, let me get one thing clear: I am no beer expert, I am merely an admirer. So, forgive me if I misuse or completely leave out pertinent beer terminology. 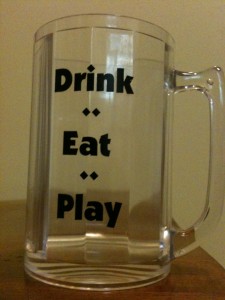 1: Be sure to take full advantage of the food. You will need something to soak up all the fun you’re having.

Naturally, before the event, I steeled myself with a greasy breakfast. However, you’ll find throughout the course of the event that even the greasiest of breakfasts won’t be enough to soak up all the beer you’ll be enjoying. Outside the hallway of heaven in Building A sat all the food trucks with such apt delicacies as Southern fried fusion, Korean rice plates, Vietnamese sandwiches and American melts. Take due advantage.

2: Never scoff at a five-ounce beer tasting mug, especially when there are around 50 breweries in waiting.

Don’t make this mistake, even if it is a cute little thing (I scoffed a little). You will get more than your fair share, and even then you will join the throngs of the other “happily imbibed” in complaining like children when the taps are cut off at the scheduled time.

3: Don’t expect to have roundtable discussions with other attendees over the body of the brew and its relationship to how light or dark it is, and so forth.

Bay Area Brew Fest is not that kind of event. On the flip side, many of the tenders are more than willing to educate and discuss. Well, if they’re not already three, four or five sheets to the wind themselves, as quite a few were. It all made for a fun environment.

4: You must prioritize which tenders you want to hit up because you will not get to all of them.

Where to start? Well, I, for one, just dove in. There was so much to choose from that most of the attendees seemed like kids in a candy store. The first table on the left was as good as any, and there sat Pizza Orgasmica. I had no idea that the company had its own brewery, and I started the day off with a clean and simple hefeweizen. One highlight on the journey was Lucky Hand, whose crazy brews confused and delighted with a light body/dark beer combination and vice versa. Triple Voodoo Brewery had a very nice Belgian that seemed to have a hint of cinnamon. My favorite of the day was Samuel Adams’ Chocolate Bock. It was truly amazing. I know many dark beers claim to have a chocolate taste but this one perfectly married the velvet taste of cocoa with all the body of what I believe to be the ideal beer. Unfortunately, it is not planned to be on local taps anytime soon.

If you’re not familiar with many of the breweries and are going at this Russian roulette style, the next two lessons are rules to live by.

6: Skip over those showcasing their product in cans as the taste is notably inferior to that of the brews poured from taps.

The first warning sign that Uncommon Brewers’ Siamese Twin Ale would be less than appetizing was the fact that it came out of a can. The brew itself was overbearing and rather disgusting, never mind a bit offensive. Don’t hesitate to dump something you don’t like, and don’t make the mistake of drinking a brew that the brewer couldn’t bother to draw from a tap at a beer tasting event.

The drinks, food and company would have been enough to tickle my fun-bone for the day, but then the event wrapped up with an impromptu dance party, courtesy of the house DJ. I doubt I need to tell you this but, dance like there’s no tomorrow after “sampling” for a couple hours. You won’t regret it. May these humble suggestions help make your next Brew Fest a delicious day in the Bay.