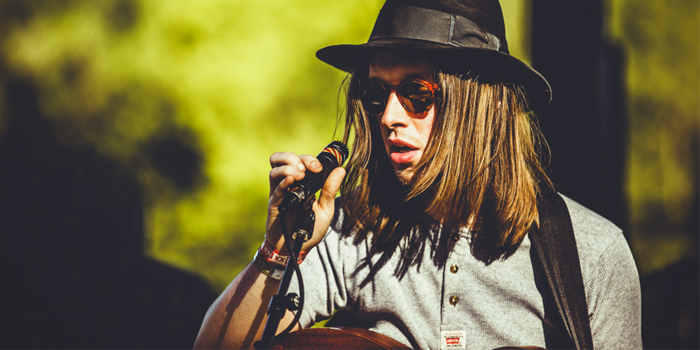 In the short time since releasing his debut 2013 album, Cabinet of Curiosities, Dutch wunderkind Jacco Gardner’s international notoriety has swelled significantly. With a distinctive style that blends equal parts baroque pop and neo-psych with a warm, throwback production sound, Gardner has managed to distinguish himself from the myriad other acts on the modern indie rock scene. Following a successful performance at Austin Psych Fest, Gardner is hitting the road for a brief West Coast jaunt that finds the talented songsmith continuing on with his evolving role as bandleader and musical nostalgist.

What type of preparations did you undertake for this current tour?

I updated my guitar setup by buying a new guitar and pickup system as well as some pedals. We also fixed some things that were broken after our other tours. On this current U.S. tour, we’re playing with keyboardist Frank Maston, who you might know from his band Maston. We’re all big fans of his music, so it’s pretty exciting. I went through keyboard parts with him online before the tour and he’s been practicing a lot at home on his own. We rehearsed for a couple of days before the first show, too, since we had never played with him before.

How have your concerts changed or evolved since you first started playing live?

We’ve all gotten better at playing together, but a lot of things have changed in the setup as well. My role in the live band has changed quite a bit. Originally I was playing two keyboards at once, then I switched to a Wurlitzer electric piano for a bit and now I’m playing acoustic guitar. We’ve also just gotten much more experienced from playing together and being on the road, so we know what to expect when we go on tour.

Do you have a pre-show ritual?

Not really, though we’re always goofing off and trying to make each other laugh. I think we just try to keep the vibe nice and pleasant before we go on stage.

We usually wake up in the same town we played the night before and then hit the road. If the drive is short, we’ll take our time and usually see some sights on the way. We love to listen to music and watch movies in the car.

Is there a particular city or venue in the U.S. where you’ve played a memorable show?

We played at Happy Dog, a hot dog place in Cleveland. It was pretty awesome and they gave us free hats.

Do you prefer playing music festivals or concert venues?

They are both such different experiences. There are things I love about concert halls, like the intimacy of the audience and having relaxed sound checks. But the festival experience is also amazing and it’s great to reach so many people at once, especially those who aren’t that familiar with my music.

What are some differences you’ve noticed between playing for audiences in the U.S. compared to audiences in Europe?

In Europe, there are so many different music cultures going on that it’s hard to name just one main difference. American audiences seem to be more used to live music, so often a big part of the audience also plays in bands, which makes for a very different understanding of the music.

My memory’s pretty bad, but I do recall playing Psych Fest last Saturday. That was pretty cool.

Do you have a favorite group that has opened for you?

Are you involved in selecting an opening band?

Yeah! Well, we get suggestions now and then. It’s a nice way of discovering new bands, too.

Are there any bands that have influenced your performance style?

I’ve always liked watching live shows of the Soft Machine with Kevin Ayers. They had something really cool about them. Also, early Pink Floyd concerts used light shows that have been pretty inspiring.

Have you seen any good concerts recently?

I saw Unknown Mortal Orchestra at Psych Fest, which was pretty cool.

Get Tickets to see Jacco Gardner