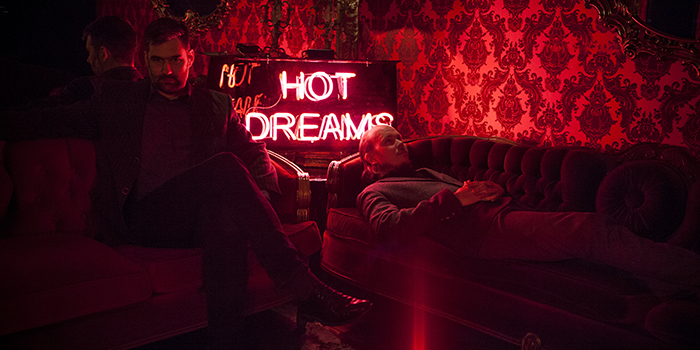 Canadian folk trio Timber Timbre has been creeping its way to the front lines of the folk music scene for the past couple of years. The band originated in 2005 from the mind of Taylor Kirk, in a timber-framed cabin in the outskirts of Ontario. Members include Kirk (singer/songwriter/multi-instrumentalist), Mika Posen (keyboardist/percussionist/violinist), and Simon Trottier (guitarist/percussionist).

Kirk, the mastermind behind the whole affair, began Timber Timbre as a solo project and later added Posen and Trottier to complete the band. In an interview with exclaim.ca he admitted, “the writing is still a solitary process, that’s always going to be something that I do on my own, usually in some kind of isolation.”

The group’s strict ‘no photo’ policy at live shows helps to maintain Timber Timbre’s dark mystery. While the band is categorized as folk, it’s music is more accurately described as dark, bluesy swamp music best experienced with a glass of thick red wine, fog, and perhaps a Ouija board.

Timber Timbre’s members struggle to stay out of the spotlight during live performances, remaining behind a curtain of spooky otherworldly images they feel better represent their music. However, upon their imminent rise to fame, growing curiosity from the media and fans has made it increasingly difficult for them to preserve this mystique.

After releasing its first two albums independently, the band next put out a self-titled album in 2009 through Out of this Spark, a local Ontario-based independent record label. Following this release, Timber Timbre signed to Arts & Crafts Productions (A&C), a Canadian label originally formed in 2003 as a vehicle for self-released material and artist management for Broken Social Scene and its members. The label quickly transformed into one of Canada’s most important, racking up 21 JUNO awards over the past 11 years. Timber Timbre has been with A&C ever since, releasing two more albums including its most recent, Hot Dreams, released this April.

Timber Timbre gained recognition after the release of its 2011 album, Creep On Creepin’ On, which reached the “Top 10 Short List” for the 2011 Polaris Music Prize. The song “Magic Arrow”, off of its 2009 album, was featured in the third season of the television show Breaking Bad.

In 2012, the band supported British folk singer Laura Marling on her UK tour, as well as Canadian singer Feist on her North American tour. Timber Timbre’s own 2014 headlining tour begins June 3rd in Los Angeles and passes through the Pacific Northwest, Canada, and Europe.

Get Tickets to See Timber Timbre