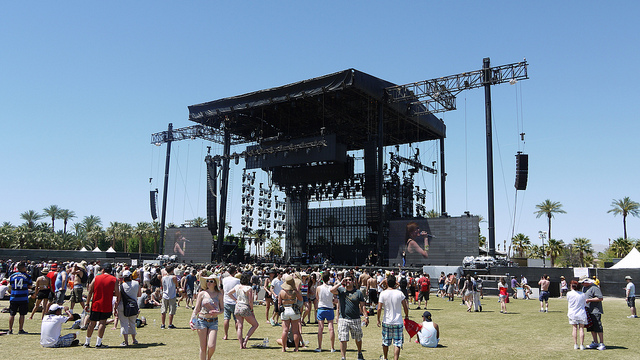 You got the look down. Now it’s time to decide which artists you want to see play at Coachella! Headliners such as Florence And The Machine, Drake, Jack White or AC/DC are obvious must-see acts. To help you out with the rest, we had a look at the Coachella underdogs. Check out the most promising live acts below!

SBTRKT
SBTRKT is an experimental music project led by Aaron Jerome that is often known for remixing hits by artists such as Radiohead and M.I.A. When SBTRKT plays live, you never know what to expect; acoustic drums, synthesizers, and voice effects are only a small part of the performance. Jerome wants the project to speak for itself and therefore he and his accompanying performers wear masks during their shows. If you enjoy performances out of the ordinary, you should definitely check SBTRKT out.

Vance Joy
You’ve probably heard Vance Joy’s single, “Riptide.” Released in 2013, it’s still being played on radio stations all over the world. The Australian singer/songwriter released his first album, Dream Your Life Away, last year and has been touring the world since. You know you’ve made it when Taylor Swift covers your songs and asks you to go on tour with her. Be sure to get to the stage early, because this show will be packed!

Kimbra
Get your dancing shoes out for this one! First earning fame as a featured artist on the smash hit “Somebody That I Used to Know” by Gotye, Kimbra is now breaking through as a solo artist. The New Zealand-born beauty mixes different music styles, from jazz to electro. Her current album, Golden Echo, is very dancy and features many catchy tunes to help the audience dance the night away.

Kele
This is your chance to see the shy Brit-rocker, Kele! You know him from his band, Bloc Party, which has sold millions of albums all over the world. As a solo artist, he’s released two albums, the most recent of which is entitled Trick. Kele is known to be shy and to not enjoy the spotlight, but he really comes out of his shell during live performances. Be sure not to miss him at Coachella.

Chet Faker
If you enjoy beards and edgy tunes, this is your guy! Chet Faker is an Australian electronica musician and a big fan of jazz music (one of his obvious favourites being Chet Baker). After his cover of Blackstreet’s “No Diggity” went viral, Chet Faker gained a lot of attention in the indie and electronic music scenes, and his 2014 album, Built On Glass, was a big success worldwide. Catch his mellow set as he makes his Coachella debut.

Fitz and The Tantrums
This band is as quirky as its name and will instantly put you in a good mood! Since releasing its first album, Picking Up the Pieces, in 2010, the group has toured the U.S. and supported artists such as Maroon 5 and Flogging Molly on tour.

Lil B
This guy is all about self-appreciation and a good attitude! Lil B, also known as Based God, is a rapper from California who calls his music “based hip-hop,” which stands for a lifestyle of tolerance and positivity. When he’s not rapping, he gives motivational speeches and writes books about the based lifestyle. Thank you BasedGod!

Swans
The festival dinosaur, Swans has been around since the ‘80s. The band stopped making music in 1997 before coming back in 2010, and its newly released albums, The Seer and To Be Kind, were both ranked in the “Top 100 of the Decade” by Pitchfork Media. Swans hasn’t forgotten to how to wow an audience, so be sure to catch the performance!

The Gaslamp Killer
Known as one of the best selectors that the west coast has to offer, The Gaslamp Killer is set to debut his “experience” at Coachella 2015. William Benjamin Bensussen used to perform in the Gaslamp District in San Diego, which is how he acquired his artist name. He released his critically acclaimed album, Breakthrough, in 2012 and has been focusing more on his career as a DJ recently.

Jamie xx
This is a must-see! Jamie xx, a member of the band The xx, has been working as a producer/DJ for a while now and remixed both of The xx’s albums in addition to working with big artists such as Adele and Florence and The Machine. He will be releasing his first album, In Color, on June 1 and is making his Coachella solo debut this year.